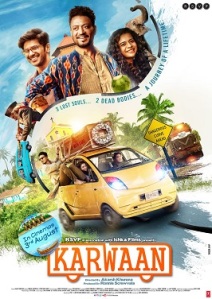 Watch the movie on Amazon Prime
Buy the soundtrack on iTunes

The dehumanizing nature of modern office culture is ideal movie fodder. Companies tout their soul-crushing policies as necessary for the sake of “efficiency” — code for cutting labor costs to increase the profits of shareholders and executives. Karwaan (“Caravan“) beautifully puts the lie to this vision of efficiency, showing instead how interpersonal connections and generosity are often better tools for getting things done than cold bureaucracy.

Dissatisfied IT worker Avinash (Dulquer Salmaan) learns of his father Prakash’s (Akash Khurana) death via a curt phone call from a travel agent informing him where to pick up the body. The two men hadn’t spoken in years, since Prakash forced his son to abandon a promising photography career for a job offering financial stability. Avinash followed his father’s wishes but never forgave him, ground down by a boring job in an office where posters touting the employees’ replaceability are considered motivational.

The body shipped to the airport in Bangalore is not that of Avinash’s father but of a woman who died in the same bus accident. The airport’s cargo supervisor isn’t keen to track down Dad’s body, leaving it to Avinash to arrange a swap with Tahira (Amala Akkineni), the daughter of the dead woman who received Prakash’s body by mistake. Avinash hops in a van with his jaded friend Shaukat (Irrfan Khan), and they drive to Kochi to make the exchange.

The road trip gives Avinash opportunities to showcase just how much one man can accomplish with a generous spirit — and a van. Tahira calls in panic when she can’t reach her daughter at college, prompting a side trip to Ooty to pick up free-spirited Tanya (Mithila Palkar). Conservative, grumpy Shaukat almost calls off the caravan when he sees Tanya wearing a dress that hits above the knee, but Avinash prevails, giving the trio further opportunities to do good on their way to Kochi.

Tanya’s youthful exuberance affirms Avinash’s altruism but highlights the rut he’s fallen into after years demoralizing office work. He judges Tanya irresponsible for her drinking, smoking, and casual flings, only to realize how much he must sound like his own dad to someone younger.

Though Shaukat’s attitude toward Tanya and some of Avinash’s own behavior are sexist, the movie itself isn’t. Akarsh Khurana’s screenplay and direction always side with Tanya’s right to make her own choices, especially since she’s not hurting anyone else and isn’t that irresponsible in the first place. Given that Tanya’s the one who instigates a side trip to return the belongings of another bus crash victim, she’s a net positive for the world.

Irrfan Khan is typically charismatic, but he never hogs the spotlight from his co-stars. Salmaan and Palkar are at their best during their scenes together. In an industry where 50-something actors routinely romance women in their 20s onscreen, it’s refreshing that Khurana’s script precludes a romance between Avinash and Tanya because of their age difference. It allows for a greater variety of scenes than we normally get when two attractive young performers are paired together.

Karwaan isn’t an explosive film — there’s exactly one action sequence, and it’s not handled that well — but sometimes you just want a movie about nice people doing nice things. Karwaan is that movie. Enjoy it.

I updated my list of Bollywood movies on Netflix with more than fifty Indian titles that are now available for streaming. Most of the new films are in Hindi (23 titles), Punjabi (22), or Tamil (7), with one new addition each in Marathi and Bengali (as well as one Urdu movie from Pakistan). The full list of titles is available in the “Newly Added” section at the top of my Netflix page. Here are all of the Bollywood films that were just added:

Supposedly, Soorma is scheduled to join Netflix in India on October 20, with Sanju set to join the catalog this month as well, so we’ll keep an eye on that. For everything else new on Netflix — Bollywood or not — check Instant Watcher.

I also update my list of Bollywood movies on Amazon Prime with one new addition to the streaming catalog: the road trip movie Karwaan, which hit in theaters back on August 3, 2018. The July, 2018 theatrical release Dhadak comes to Prime in India on October 4, so hopefully we’ll get it here in the US as well.

Update: Thanks to my Twitter pal Gaurav for letting me know that Fanney Khan debuts on Amazon Prime on October 12, and Sanju hits Netflix on October 15.

2018’s two Indian Independence Day releases turned in middling performances in their first weekend at the North American box office. Leading the way was Gold, which opened in about five times as many theaters as Satyameva Jayate and made about five times as much money. From August 17-19, 2018, Gold earned $444,267 from 190 theaters ($2,338 average), according to Bollywood Hungama. Including earnings from August 15-16, Gold‘s total after five days stood at $578,617. This is down a bit from the performance of star Akshay Kumar’s 2017 Independence Day release — Toilet: Ek Prem Katha — which earned $670,447 in its opening weekend in North America.

Most of the attention over the weekend went to the Telugu movie Geetha Govindam, which made $760,765 from 161 theaters ($4,725 average), bringing its 5-day total to $1,492,256. The rest of the Hindi films still showing in US and Canadian theaters are clearly on their way out:

It was a slow weekend for Bollywood movies at the North American box office, with audiences holding off in anticipation of Wednesday’s Independence Day releases (or maybe everyone was watching The Meg). The only new Hindi release was Vishwaroop 2, accompanied by its Tamil counterpart, Vishwaroopam 2. Most Indian movies that release in multiple languages don’t publish separate earnings figures for each language, but Viswaroop(am) 2 did. According to Bollywood Hungama, Vishwaroop 2 (Hindi) made $17,865 from 41 theaters in North America ($436 average), a figure I assume includes earnings from Thursday night previews. 143 Cinema reports Thursday-Sunday earnings for Vishwaroopam 2 (Tamil) of $353,321 from 127 theaters ($2,782 average).

Other Indian movies showing in the Chicago area this weekend:

Three new Bollywood releases, three lackluster opening weekends. Fanney Khan, Karwaan, and Mulk struggled during the weekend of August 3-5, 2018, with all three posting totals well below $200,000, the median opening weekend total for Hindi films in North America for the year so far. Fanney Khan scored the widest release, giving it the biggest returns: $139,584 from 69 theaters* ($2,023 average), according to Bollywood Hungama. Karwaan was next with $91,108 from 58 theaters ($1,571 average), followed by Mulk, with $53,747 from 25 theaters ($2,150 average). Those low totals aren’t just a result of modest theater counts. All of the films’ per-theater averages were far below this year’s median average of approximately $3,000, indicating a lack of audience interest.

*Bollywood Hungama routinely counts Canadian theaters twice in its weekly reporting, at least for a movie’s first few weekends of release. When possible, I try to verify the correct theater count with other sources. The above figures represent what I believe to be the actual theater counts. Bollywood Hungama’s reporting technically puts Fanney Khan in 83 theaters (making for a $1,682 per-theater average), Karwaan in 68 theaters ($1,340 average), Mulk in 31 theaters ($1,734 average), and Sanju in 22 theaters ($1,033 average).

Fanney Khan opens Friday at the AMC River East 21 in Chicago, MovieMax Cinemas in Niles, AMC South Barrington 24 in South Barrington, and Regal Cantera Stadium 17 in Warrenville. It has a listed runtime of 2 hrs. 9 min.

Also new this week is the road trip flick Karwaan, featuring Irrfan Khan and Malayalam-film star Dulquer Salmaan in his Bollywood debut. Karwaan opens Friday at the River East 21, MovieMax, and South Barrington 24. It has a listed runtime of 1 hr. 54 min.

Last among the new releases is the courtroom drama Mulk, starring Taapsee Pannu and Rishi Kapoor. Mulk opens Friday at MovieMax and the South Barrington 24. It has a listed runtime of 2 hrs. 20 min.

Karwaan isn’t Irrfan Khan’s only new local release this weekend. He co-stars in the English-language film Puzzle, a drama about a New England housewife whose life changes after receiving a puzzle as a gift. It debuts Friday at the River East 21, Century Centre Cinema in Chicago, and Century 12 Evanston in Evanston before it opens region-wide on August 24. I haven’t stopped thinking about Puzzle since I watched it.

Other Indian movies showing in the Chicago area this weekend: