Though the three Khans dominate the Hindi film industry at home and abroad, it’s important not to overlook Hrithik Roshan’s popularity in the United States and Canada. Check out Hrithik’s North American box office returns since 2001. 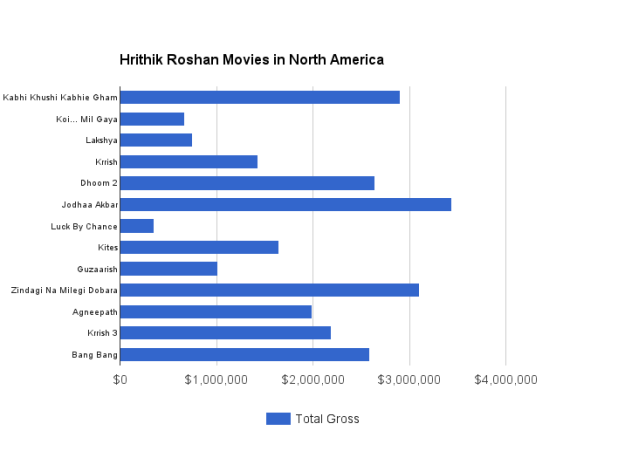 Though not as prolific as other Bollywood heroes, Hrithik is certainly dependable at the box office. Ten of the thirteen films he’s released since 2001 — the ones for which I have reliable data — have earned at least $1 million in the States. His only movie to earn less than $500,000 in North America was 2009’s Luck By Chance, in which he played a small supporting role (despite featuring prominently on the film’s poster).

With the three Khans in a league of their own, let’s pit Hrithik’s track record against that of a more comparable A-list star: Akshay Kumar, an actor as profligate as Hrithik is picky. Though Akshay has had a great 2016 so far — with Airlift earning $1.8 million here in January and Housefull 3 $1.3 million in June — this chart I made in 2014 showed his earnings in North America trending down. None of the four films he released in 2015 made $1 million.

Akshay’s highest finish in the all-time Bollywood box office list for North America is 45th place for 2008’s Singh Is Kinng. Five of Hrithik’s films rank above that, including two in the Top 20 (Jodhaa Akbar in sixteenth place and Zindagi Na Milegi Dobara in eighteenth place). While Akshay may have greater lifetime receipts due to volume, Hrithik’s earning potential for any given film is higher.

Hrithik and Akshay face off in theaters on August 12, 2016, with the release of Mohenjo Daro and Rustom, respectively. Mohenjo Daro reunites Hrithik with his Jodhaa Akbar director Ashutosh Gowariker, but the film’s leading lady, Pooja Hedge, is a newcomer to Hindi films (as opposed to his superstar Jodhaa Akbar heroine, Aishwarya Rai Bachchan). On the other hand, movies with patriotic themes — like Holiday, Baby, and Airlift — have been Akshay’s bread and butter in recent years, and he plays a Navy officer in Rustom. It’s going to be fun to see who wins this box office duel.