Akshay Kumar’s Holiday: A Soldier Is Never Off Duty recently posted the fifth highest opening weekend gross for a Bollywood movie in North America in 2014. That sounds good, but a closer look at the numbers reveals a downward trend in Kumar’s box office viability in the U.S. and Canada since 2007. 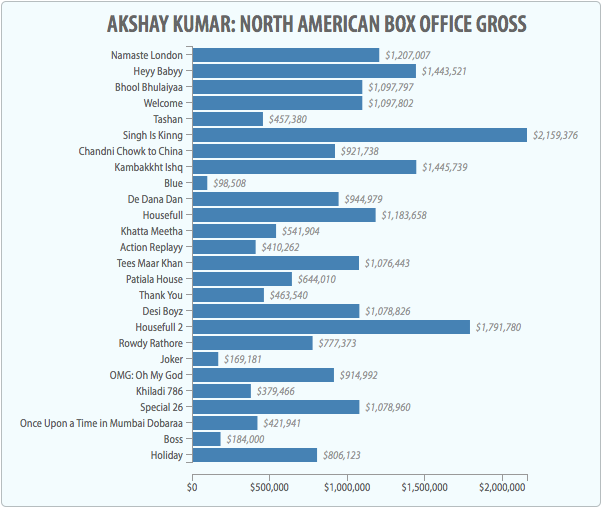 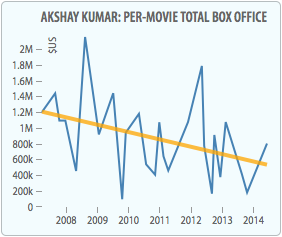 Over the last seven years, Kumar’s per-movie grosses in North America have decreased by almost half (from about $1.2M to $0.6M). Between 2007-10, Kumar reliably earned more than $1 million from each North American release. Since 2011, however, only three of Kumar’s twelve movies have surpassed that mark — and two of those just barely made it. 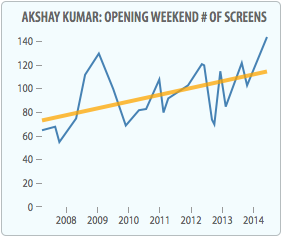 While his movies are making less money, the number of North American theaters carrying Kumar’s movies has, for some reason, increased. He routinely opens on more than 100 screens here, and Holiday is his biggest release yet, opening in 144 theaters. That’s the third highest opening weekend screen count here this year, behind Salman Khan’s Jai Ho (183) and Yash Raj Films’ Gunday (150). 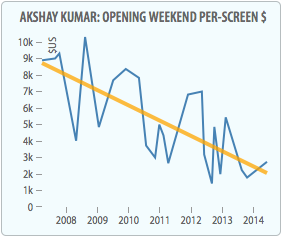 Despite showing on more screens than ever, Kumar is only bringing in one-third as much money as he used to for each of those screens. Kumar’s opening weekend per-screen averages have plunged from nearly $9,000 per-screen to about $3,000 per-screen today.

There’s a disconnect between the Kumar movies that distributors and theaters think the North American audience wants to see and the films that the audience actually wants to see. Based on earnings, North Americans like Kumar best as part of an ensemble or as a supporting character, and less as a solo leading man. And they don’t like him paired with Sonakshi Sinha. The duo has made five movies together since mid-2012, and none has performed as well as their first, Rowdy Rathore. Even that film earned well short of $1 million ($777,373 to be exact).

It’s only a matter of time before theaters realize that their screens could be put to better use.