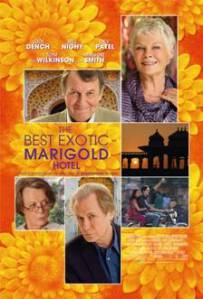 Early in The Best Exotic Marigold Hotel, married couple Jean (Penelope Wilton) and Douglas (Bill Nighy) tour a retirement home. The apartment they tour features a wall-mounted emergency call button to be used in case one should fall and need assistance. Jean caustically notes that the button is handy if she should happen to accidentally fall right next to it, but not so much if she falls anywhere else in the room.

My parents recently moved into a retirement community with a similar setup. To access their emergency call button, one of them would have to fall and land wedged between the TV set and the wall. I’m as skeptical of their button’s usefulness as Jean is of hers.

That sense of pragmatism pervades a movie with a somewhat a fantastical premise: starting a new life of luxury in exotic India. A brochure promises opulent retirement living for British pensioners at The Best Exotic Marigold Hotel for the Elderly and Beautiful.

But it’s not a sense of adventure that leads the characters to move from England to India. For Jean,  Douglas, Evelyn (Judi Dench), and Muriel (Maggie Smith), it’s financial worries. For Graham (Tom Wilkinson), it’s a desire to right a youthful mistake. And Madge (Celia Imrie) and Norman (Ronald Pickup) want to improve their romantic prospects.

When the group arrives in India, they discover that the hotel is not as luxurious as promised. The brochure depicts the vision young owner Sonny (Dev Patel) has for his family’s property, not its current derelict state. The manner in which the retirees deal with their situation makes up the meat of the story.

As my parents, in-laws, and their friends approach (and, in some cases, surpass) age 70, they’ve all repeated the same refrain: “Getting old sucks.” The Best Exotic Marigold Hotel is so effective because it acknowledges that reality. No matter how well you think you’ve prepared for your later years, there always seems to be something — money, health, or family troubles — that makes a difficult stage of life even more so.

Acknowledging this reality allows the funny parts of the film to be that much more humorous. And The Best Exotic Marigold Hotel is a very funny movie.

Given the caliber of the cast, the performances are universally terrific, as each character adapts to the surroundings while addressing the issues that got him or her there in the first place. Penelope Wilton (Mrs. Crawley on Downton Abbey) is effective to an uncomfortable degree as Jean resists settling down in her unfamiliar new home.

Maggie Smith steals the show with her ludicrously inappropriate jabs, which are funny only because of how powerless she is. Awaiting her hip transplant in an Indian hospital, she reacts in shock to discover that her doctor is Indian. Predictably and appropriately, she takes strides to shed her prejudices over the course of the film.

Sonny’s storyline is the only aspect of the movie that doesn’t really work. Rather than intersecting his storyline with those of his tenants, his runs parallel to theirs. When new characters (e.g., his girlfriend and his disapproving mother) are introduced solely to augment Sonny’s story, it just highlights how separate that story is from the rest of the action.

That said, Dev Patel is very funny, and his storyline doesn’t detract much from what is overall a really enjoyable picture.

With every Hindi movie I watch, I expect that I’m not going understand everything. I don’t speak Hindi, so wordplay jokes go right over my head. I’ve lived in America my whole life, so references to things like Indian historical figures also go over my head. Rarely do these cultural and language differences impede my enjoyment.

But Kaminey is different. On top of a convoluted plot, Kaminey contains so many euphemisms and Indian regional references that most non-Hindi-speaking Westerners may find it more confusing than entertaining.

The plot of Kaminey (“Scoundrels”) focuses on the troubled lives of pair of identical twin brothers, both played by Shahid Kapoor. Guddu is a straight-arrow who stutters and has a cute girlfriend named Sweety (Priyanka Chopra). Charlie is a thug who works with a gang to fix horse races. He has a speech impediment which causes him to substitute the letter “f” in place of “s”.

Charlie gets his big break when he accidentally finds a huge stash of cocaine, which he intends to sell for big bucks. Meanwhile, Guddu’s life is threatened when Sweety’s brother finds out that she’s pregnant with Guddu’s child. The twins, who haven’t spoken in years, each get suspected of the other’s actions, and all hell breaks loose.

Kaminey is a great looking film. It’s dark and atmospheric; there’s nothing neon or glossy about it. And its fight scenes are gritty and believable, without being gory.

But the convoluted plot gets in the way of everything. You practically need a flow chart to keep track of who’s stolen what from whom, and who’s ultimately supposed to receive which stolen goods.

Then there are the aforementioned language differences. Charlie’s f-for-s substitutions are pretty meaningless to those who don’t understand Hindi. He occasionally utters some altered English words, like “fortcut” and “Fweety” in place of “shortcut” and “Sweety.” I’m not sure if it’s supposed to be funny, but I found it more distracting than amusing.

Also troublesome is the subplot of Sweety’s angry gangster brother, Chopper Bhope. He objects to Guddu marrying his sister because Guddu is originally from “U.P.” — and that won’t fly with the Maharashtra constituents Bhope needs to win over as he tries to become a politician.

This conflict doesn’t mean much to the average American, who probably doesn’t know that U.P. refers to Uttar Pradesh, which, as with Maharashtra, is an Indian state. (My fellow Midwesterners need not worry that Bhope holds anything against residents of Michigan’s Upper Peninsula.) It’s not the movie’s fault that Americans are bad with world geography, but there were points during the film when I tuned out, resolving to visit Wikipedia when I got home, to look up references I didn’t get.

Because of these problems, it’s hard for me to say whether Kaminey is actually a good movie. It didn’t work for me, but it might be great if you understand Hindi and have a better handle on geography than I do. The best endorsement I can give is that I find director Vishal Bhardwaj’s visual style is interesting enough that I’m going to rent some of his prior movies. 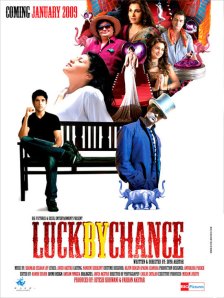 If any Indian director can become a crossover success in the United States, it will probably be someone from the Akhtar family. Farhan Akhtar updated the movie musical with last year’s Rock On!!, and now his sister, Zoya, shows just how mature and sophisticated Indian storytelling can be in Luck By Chance.

Zoya’s directorial debut follows the careers and personal lives of up-and-coming actors Sona (Konkona Sen Sharma) and Vikram (Farhan Akhtar). As the two navigate their way through auditions and bit roles with titles like “Dead Sister’s Friend”, their struggles prove the adage “It’s not what you know, it’s who you know.”

The world Sona and Vikram inhabit feels authentic, in part because the characters in Luck By Chance actually talk with one another. In many Bollywood movies, feelings and worldly truths are expressed via extended speeches — and not in the course of normal conversation, as happens in real life. Zoya & Farhan’s father, poet Javed Akhtar, wrote the movie’s dialogue, and he deserves much of the credit for its creative success.

The plot proceeds in unexpected (yet always believable) directions, further separating Luck By Chance from typical Bollywood fare. A smart U.S. distributor would’ve marked this as an Indian arthouse film and targeted it toward Western audiences. As it stands, it may not be in theaters much longer, so I recommend seeing it while you can.

Taare Zameen Par, India’s official entry into the Oscars’ Best Foreign Language Film category, wasn’t chosen as one of the final five nominees. I’m not surprised. By selecting Aamir Khan’s domestically popular film about dyslexia, India’s selection board passed on two other films that would’ve had a better chance at being nominated by the overwhelmingly American Academy.

The problem with Taare Zameen Par is that it’s not as socially or emotionally relevant to audiences in the United States as it is to audiences in India. While the film may have drawn much needed attention to the disservice still being done to students with learning disabilities in the Indian educational system, public schools in the U.S. have been offering customized learning opportunities for special needs students for decades.

As a product of the U.S. public school system, I recognized little Ishaan’s reading disability within the first thirty minutes of the movie. I then had to wait another hour before any of the characters in the movie did. I imagine many of the Academy voters watching Taare Zameen Par were as frustrated by the slow pace as I was.

Considering the cultural background of the Academy Award voters who nominate movies in the Best Foreign Language Film category, here are my suggestions for two films that would’ve had a better chance of earning a nomination:

Jodhaa Akbar — A beautiful epic with gorgeous music, this seemed like the most obvious choice to represent India, especially since director Ashutosh Gowariker’s equally accessible Lagaan was nominated in 2002.

Black & White — This might’ve been the boldest movie to come out of India in 2008. Its sensitive handling of the issue of Islamic terrorism would’ve given Academy members an opportunity to show that Americans have a more nuanced understanding of terrorism than the “destroy the evildoers” mentality that our government has exhibited for most of this decade.

Here are links to my reviews of Taare Zameen Par, Jodhaa Akbar and Black & White.

Two slacker film students develop a love for their country as they travel across India. Preity Zinta provides the film with emotional gravity as a soldier’s widow, and Sunny Deol gets the most memorable scene, beating up a dozen people while seated in a wheelchair. Heroes is patriotic without being nationalistic, although the tone is sappy at times. The breathtaking scenery is more than enough to make anyone fall in love with India.

This review originally appeared in The Naperville Sun on October 30, 2008