Mere Brother Ki Dulhan opens on Friday at the Big Cinemas Golf Glen 5 in Niles, AMC South Barrington 30 in South Barrington and Regal Cantera Stadium 17 in Warrenville. Check here for a complete U.S. theater list. It has a listed runtime of 2 hrs. 25 min.

All three theaters are understandably carrying over Bodyguard after it made $1,361,790 during its first six days in the U.S.  Bol, which earned a much more modest $105,354 in its first six days, is sticking around at the Golf Glen 5 and South Barrington 30.

Last week’s other new release, the compelling but dark That Girl in Yellow Boots, leaves area theaters on Thursday.

The Golf Glen 5 will also carry over the Tamil movie Mankatha for another week. 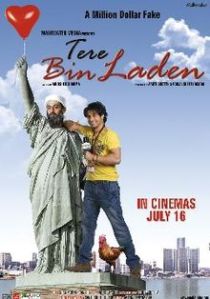 In the United States, it’s not especially fashionable to criticize the government’s (and military’s) response to terrorism, let alone to do so in an irreverent way. Tere Bin Laden (“Your Bin Laden”) fills that void, satirizing America’s penchant for preemptive military action.

Pakistani reporter Ali Hassan (Ali Zafar) wants to make it big in America. But, just days after 9/11, he’s mistaken for a terrorist and permanently banned from entering the U.S. He could sneak into the States under a false identity, but he can’t afford the fees a real terrorist outfit — “Lashkar-E-Amreeka,” whose headquarters have the slogan “Invading USA Since 2002” painted next to the front door — charge for the forged documents.

Seven years later, Ali’s stuck working at a low-budget TV station when he stumbles upon a chicken farmer who’s a dead ringer for Osama Bin Laden. With the help of two coworkers from the station, a militant radio host and an aspiring beautician, Ali tricks the chicken farmer into recording a fake Bin Laden terror video. Ali sells it for enough money to finally afford the forged documents.

Unfortunately, the video prompts the U.S. to close its borders and engage in new military operations in Afghanistan. It’s bad enough that Ali is stuck in Pakistan for good, but the U.S. intelligence service expands its hunt for Bin Laden to Pakistan, and soon enough, Ali is in their sights.

For the most part, the movie is a typical comedy about mistaken identities. But some of the jokes made at the expense of the U.S. are insightful and very funny. When a U.S. military commander presents the plans for a renewed offensive in Afghanistan, the plans are rendered as comic book panels, with American soldiers depicted as caped superheroes. Troops brag about capturing “Osama’s personal donkey.”

If you’re in the mood for juvenile humor, Tere Bin Laden certainly satisfies. Noora (Pradhuman Singh), the Osama lookalike, is a goldmine for comedy, given his profession as a raiser of roosters. There are more jokes about the male anatomy in Tere Bin Laden than in all of the 100+ Hindi movies I’ve seen combined.

The immature jokes hit a low point when Ali dons blackface makeup. And the goofy sound effects that permeate the movie are annoying, rather than funny. (The DVD menu features an irritating loop of a rooster crowing. Hit “play” as quickly as possible.)

This is Pakistani pop singer Ali Zafar’s first starring role, and he does an admirable job as Ali. He’s charming, effortless and completely adorable. The rest of the supporting cast is good as well, with a few notable exceptions.

The exceptions are the “American” characters. I use quotes because, almost across the board, the characters are played by Australians who can’t disguise their accents. Singh supposedly spent eight months training for Noora’s few lines of Arabic dialog, but there were no American actors available to play American parts?