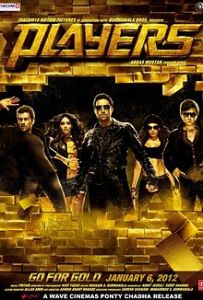 With source material as rich as not one, but two, versions of The Italian Job to draw from, Players should be a slam dunk. Wisely, filmmaking duo Abbas-Mustan take the best aspects from their inspiration and add enough new touches to make it an enjoyable Indian action flick.

My biggest fear before seeing Players was that it wouldn’t be able to hold interest for 2 hours and 47 minutes. But Players is about as well-paced as a nearly three-hour-long movie can be, hitting plot points at the right times so as not to let the action drag.

Abhishek Bachchan anchors the film as Charlie Masceranas, a career thief. He learns from a dying friend about the Russian government’s plans to transfer a large amount of gold bars to Romania. With the help of his imprisoned mentor, Victor (Vinod Khanna), Charlie assembles a team of experts to execute a daring heist.

So as not to appear to condone thievery, the filmmakers give the crew corny motivations for stealing the gold. Charlie wants to fulfill Victor’s dream of opening India’s largest orphanage. Ronnie, a former magician, wants to build a fully automated house for his daughter, who was accidentally paralyzed during one of his tricks.

Ronnie gets some unintentionally hilarious lines when he explains the end of his stage career: “Magic doesn’t do anything. It only ruins lives.”

Thankfully, Sunny, Bilal, Spider and Riya are just in it for the money. When the plan goes awry, Victor’s daughter, Naina (Sonam Kapoor), comes to Charlie’s aid.

There are some nice interactions between the team members. Sunny and Bilal are funny sparring partners, and Naina’s crush on Charlie creates tension between her and Riya. Charlie is the anchor, but this really is an ensemble film.

Besides the star cast, the movie’s main attractions are its action sequences. The gold-theft scene is tense, and the car chases are pretty good. Strange editing and artificially sped-up shots keep the fight scenes from looking their best, but interesting locales like Russia and New Zealand elevate the whole experience.

A tendency toward corniness pervades Players, to its detriment. It keeps the film from achieving the snappy sophistication of the films that inspired it. In addition to Charlie’s and Ronnie’s Robin Hood motivations, the score heavy-handedly tries to provoke emotions.

The most pandering element in Players is the needless inclusion of comic actor Johnny Lever, a regular feature in Abbas-Mustan films. I don’t find Lever funny, or more accurately, I don’t find the outrageous characters he always plays funny. That directors feel the need to pair his appearances with wacky sound effects just makes things worse. Any spell the movie could hope to cast is broken when Lever appears onscreen.

Another element that can’t be overlooked is how pointedly the movie targets a male audience. Basu and Kapoor both have a couple of forgettable dance numbers requiring to them to gyrate in skimpy dresses. Another female character is viewed through frosted glass as she showers. Almost every Anglo woman in the movie is kitted out in hot pants.

Yet the male stars aren’t required to doff their clothes, apart from a brief scene featuring Mukesh in a bubble bath. Bachchan and Deol are regular romantic leads, and Kher is clearly fit. Why not work in a shirtless shot of one of them, in the name of gender equality?

The thread of sexism isn’t limited to who’s asked to expose the most skin. Naina and Riya are both asked to play the role of seductress to aid the team, which features five men (six, including Victor) and only two women. Language denigrating women goes largely unchallenged by the male heroes.

That said, Players works as an action film. It hits the right notes often enough to sustain excitement for almost three hours, which is the primary objective of any action movie.