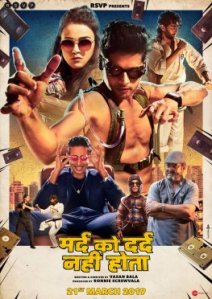 By the time most of us reach adulthood, we’ve figured out that society is unfair and you only get as much justice as you can pay for. But what if you grew up without that knowledge? What if you truly believed that you could fight the bad guys and win?

Such is the case for Surya, the hero of Mard Ko Dard Nahi Hota (“The Man Who Feels No Pain“, MKDNH, henceforth). Born with a congenital insensitivity to pain, young Surya (Sartaaj Kakkar) spends most of his childhood indoors. His father Jatin (Jimit Trivedi) wants to protect his son not just because of his unique condition, but because he’s all that remains of Jatin’s wife (played by Shweta Basu Prasad), who died in a mugging days after Surya’s birth.

Jatin’s father-in-law lives with them, and he too wants to keep his daughter’s memory alive through Surya. Rather than keep the boy wrapped in cotton wool, Grandpa (Mahesh Manjrekar) encourages the boy to emulate his mother’s feisty streak (which we see through flashbacks as Surya imagines the mother he never got to know). Grandpa and grandson binge watch martial arts movies on VHS, with Surya acting out the moves and Grandpa teaching him how other people experience pain, so the boy can disguise his condition to the outside world.

An energetic boy with heroic instincts and an inability to accurately judge risk is a force to be reckoned with. [My nephew is basically Surya with pain sensitivity, so I speak from experience.] When the neighbors deem the 9-year-old wannabe vigilante a menace to society, the family moves away — separating the boy from his tenacious best friend Supriya (Riva Arora) and leaving her at the mercy of her abusive, drunken father.

Fast forward twelve years, and 21-year-old Surya (Abhimanyu Dasani) is ready to head out into the world. His mission is to reunite with “Supri” (Pataakha‘s Radhika Madan) and meet his hero: one-legged martial artist Karate Mani (Gulshan Devaiah). When Karate Mani’s evil twin brother, Jimmy (also Devaiah), steals Mani’s locket, Surya is finally able to put his training to the test — against the pragmatic advice of Supri and Karate Mani himself.

MKDNH is a nostalgic action comedy. It is to martial arts movies of the mid-20th century what Super 8 was to old monster movies. MKDNH‘s stunts are all the funnier for the ways reality intrudes upon them. Surya envisions the way fights will go, only for them to play out in sloppy and un-cinematic ways.

Underneath all the flying fists and high kicks is a touching story about families. Jatin wants to protect Surya physically but emotionally, too, long after Surya has become an adult. There’s a compelling subplot about Supri’s dysfunctional family and whether she will follow her in her mother’s (Lovleen Mishra) footsteps and tolerate abuse for the sake of protecting someone she loves. Mani’s conflict with Jimmy is the continuation of a lifelong battle for their father’s approval.

Yet MKDNH is never maudlin. Writer-director Vasan Bala trusts the audience to feel the story’s emotional weight and connect with the characters while always being an out-and-out comedy. It’s a difficult feat that is executed to perfection.

I don’t think there’s any way to improve upon MKDHN. It feels like the fullest possible realization of Bala’s vision, from the music and costumes to Jay I. Patel’s cinematography and Prerna Saigal’s editing. Every one of the actors is tremendous, with Devaiah and Manjrekar making the most of their delightful supporting characters without overshadowing Madan or Dasani, in his very first film role.

I updated my list of Bollywood movies on Hulu with one new addition to the catalog. 2015’s Hunterrr is now available for streaming, without a subscription. While not a perfect film, Hunterrr does have interesting performances by Radhika Apte and Gulshan Devaiah, two actors I’d love to see more of in the future. 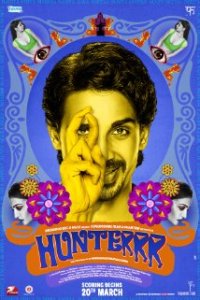 Buy/rent the movie at iTunes

Compelling performances are the saving grace of Hunterrr, an otherwise unsatisfying tale of a playboy who won’t grow up.

Hunterrr isn’t as colorfully sexy as its poster suggests. Gulshan Devaiah plays Mandar, a thirty-something man on the good-looking side of average with all the style acumen of stereotypical IT guy. He’s a lech who sizes up every woman he sees, planning his next conquest.

Since he’s no supermodel himself, Mandar has a method for improving his odds: don’t pursue the most attractive woman in a group; go for second best. Second best is still good, but her self-esteem is likely lower than that of her lovelier counterpart, making her more susceptible to flattery.

Only when Mandar gets called “uncle” while hitting on a woman at a bar does he realize he’s getting too old to play Casanova. He reasons that an arranged marriage guarantees him a permanent sex partner, but he finds his promiscuous habits hard to break even after he meets his betrothed: fun, beautiful Tripti (Radhika Apte).

Hunterrr is told in non-linear fashion, flashing back to Mandar’s early days as a pervert. Scenes of young Mandar with his cousins — handsome Kshitij (Vaibbhav Tatwawdi) and chubby Yusuf (Sagar Deshmukh) — are primarily excuses for scatological jokes. Writer-director Harshavardhan Kulkarni punctuates the comic sex romp with awkwardly serious moments, making it hard to feel comfortable with the film’s tone.

This is a tough movie to enjoy largely because Mandar is so awful. He never faces any serious consequences for his behavior, and he assumes no responsibility for the consequences faced by the women he beds. When Yusuf points out that a housewife Mandar’s been shtupping is on her way to divorce court after her husband discovered the affair, Mandar just shrugs and leaves town.

Credit to Devaiah for playing such a believable sociopath. He makes Mandar seem so ordinary, non-threatening even, until we realize how little Mandar cares about other people. The film even ends with Mandar cheerfully explaining to Yusuf that he’ll get away with his latest transgression because most women are too embarrassed to admit to any kind of sexual contact, consensual or not.

Tripti is as charming as Mandar is loathsome. She’s frank about her own romantic history, with a slightly bawdy sense of humor. Like Devaiah, Apte’s performance is grounded and convincing. She’s the real star of the film.

Kulkarni is great at writing complex female characters, whether it’s Tripti in Hunterrr or Meeta in Hasee Toh Phasee. Here’s hoping his future films focus more on his sophisticated heroines than on the dopey guys he saddles them with.