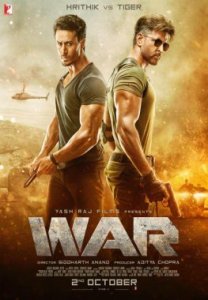 Buy the DVD at Amazon
Buy the soundtrack at iTunes

Pitting two of Bollywood’s biggest action stars against one another lives up to the hype in War, a tremendously fun, globetrotting thrill ride.

Indian super-spy Kabir (Hrithik Roshan) has gone rogue. A task force including his former pupil, Khalid (Tiger Shroff), must track Kabir down and figure out what happened. Their boss, Colonel Luthra (Ashutosh Rana), assigns another agent to lead the task force because Khalid is “too close” to Kabir. Khalid’s colleague Aditi (Anupriya Goenka) covertly funnels him information, because she wants to find Kabir as badly as he does.

Kabir’s team was the best of the best, hot on the trail of international criminal Rizwan Ilyasi (Sanjeev Vasta) when Khalid joined them as a promising new recruit. The onboarding process was rocky, since Kabir worried that Khalid might harbor some resentment for Kabir having killed his agent-turned-terrorist father (in self defense!). But Khalid proved both loyal and capable, winning Kabir’s trust — only for Kabir to turn on the government he swore to protect.

Khalid’s desire to join Kabir’s team stems both from a need to show the world that he is not his father’s son and from his infatuation with Kabir. Roshan as Kabir gets one of cinema’s most loving introductions, stepping out of a helicopter with the wind blowing his hair, striding muscularly, like a being made of pure testosterone. Khalid gawks at him on behalf of all of us.

Not to be overlooked is Khalid’s own introduction, via one of Bollywood’s best-ever fight scenes. The fight choreography and Ben Jasper’s camera work as Khalid tosses drug dealers around an apartment are spectacular. Shroff’s athletic prowess is just as impressive.

War is among the most expensive Indian films ever made, and it looks it. Chase scenes — whether on foot or via car or motorcycle — in foreign locales are as exciting to watch as they are stunning to look at. The scale is big, the stakes are high, and writer-director Siddharth Anand pushes the envelope even further than his previous action spectacular, Bang Bang, which also looked great but was disappointing. The lessons learned from that film translated into a thriller that can stand up alongside anything Hollywood has to offer, with well-integrated CGI, practical effects, and complicated stunt work.

Another improvement is in the quality of acting Anand gets from his performers. Roshan was miscast in the action-comedy Bang Bang, but he plays Kabir perfectly as steely but not unfeeling. Shroff has always been his best when playing underdogs, and he uses that here to show how Khalid’s over-eagerness makes him reckless. Goenka’s role is utilitarian — she’s always there with the right information at the right time — but she gives Aditi a spark.

Vaani Kapoor has a small but impactful role as Naina, a dancer Kabir befriends while tracking Ilyasi on a solo mission in Italy. Naina pegs Kabir’s martyr streak as dangerous. Kabir says his team is his family, but Aditi has a fiance and Khalid has his mother — Kabir’s the only one with no one else to come home to. It helps to remind Kabir that real people are involved, something the movie notes when Colonel Luthra acknowledges some Portuguese soldiers killed in a mission gone wrong. The characters don’t just rampage through cities without consequence.

Sure, some loose ends are left hanging at film’s end, and the ridiculous climax includes what is essentially a really-effective Audi commercial. But no one can ever accuse War‘s cast or crew of phoning it in. Anand wanted world-class stunts and powerful action sequences, and he got them. Roshan and Shroff look jacked, and their fights and dance scenes are impressive. Kapoor stands out in her acrobatic showcase dance number as well. War is just tremendous fun and a great example of a movie that warrants viewing on the biggest screen possible.

Buy the soundtrack at iTunes

Trying to explain what Jeena Isi Ka Naam Hai is about is a futile task. Not even the writer of the movie, Amreetaa Roy, was up to the task of succinctly describing her own film. Here’s the summary she submitted to IMDb:

The film presents the naïve vulnerability of human life, the sincere saga of love and pain, and the glimpse of human emotions in raw form. So much of human nature is captured within the frames of the film, yet it takes you to the various land giving a realistic view of existence – the story traversing from a small town of Rajasthan, moving to the city of dreams – Mumbai and then goes on to the city that never sleeps – New York, ride us through interesting characters, each one with a diverse and unique character adding slice of life. Written by Amreetaa Roy

That rambling mess of a plot summary captures all the problems with Jeena Isi Ka Naam Hai (JIKNH, henceforth). It has no identity or focus because it tries to be about every issue and every emotion all at once.

Our onscreen guide through JIKNH is Alia (Manjari Fadnis), who experiences — directly or indirectly — virtually every kind of gender discrimination a woman can face. That extends to the closing credits of JIKNH, in which her name appears third in the cast list despite her playing the film’s main character.

In spite of a deprived childhood in Rajasthan in which Alia’s material and emotional needs ranked a distant fifth behind those of her two younger brothers and her parents, she excels as a student, developing an affinity for writing. As a college student, her no-nonsense attitude attracts the attention of an older, villainous rich guy, Vikram (Ashutosh Rana).

To this point, Alia’s story is one of resilience and self-sufficiency in spite of her family’s utter indifference toward her. Every indication points toward her graduating and building a successful life for herself, possibly with younger, not-so-villainous rich guy, Alex (Himansh Kohli). So it makes no sense when she quickly cedes to her drunken father’s request and accepts Vikram’s marriage proposal, especially since she knows Vikram to be a violent lech with multiple mistresses.

Predictably, marriage to Vikram is a nightmare. Alia escapes with the help of her tough-as-nails maid, Laxmi (Supriya Pathak), after Vikram demands that pregnant Alia abort the female fetus she’s carrying (checking off another item on the list of Gender Issues the movie feels compelled to address).

As Alia starts a new life in Mumbai, JIKNH‘s Social Issues checklist branches out from gender-based problems like spousal abuse and the diminished earning power of rural women to topics like elder care, the education of orphans, and vaccination. Eventually, Alia winds up in a Middle Eastern war zone, directing the medical care of wounded civilians in her capacity as a journalist. Alia is out to save everyone from everything.

That joke isn’t nearly as funny as the fact that Alia’s and Aditya’s love theme is an instrumental version of “The First Noel.”

International audiences will want to give JIKNH a pass not only because it’s an unwatchable disaster with no continuity or sense of direction, but because the English subtitles frequently disappear, including during the closing lines of the film.

The last quarter of the movie takes place in America, and JIKNH does a particularly awful job of depicting the States, even by Bollywood’s low standards. The white actors are unbearable, and there are some serious geography problems. According to director Keshav Panneriy — who also edited the film and is married to the movie’s writer — the island of Manhattan is nestled within a mountain range, and its nearest airport is in Maryland.

The American portion of JIKNH does yield some of the movie’s most sophisticated dialogue. Confronting a man who harasses her and her friend on the street, Alia retorts in English: “Yes, we have a nice ass, and we are proud of it. You are just an ugly ass who makes the whole neighborhood stink!”

First Student of the Year, then Main Tera Hero, and now Humpty Sharma Ki Dulhania (“Humpty Sharma’s Bride“). Three films into his career, and Varun Dhawan has positioned himself as Bollywood’s hero of the future.

Humpty Sharma Ki Dulhania (HSKD, henceforth) is made in the mold of classic romcoms, most explicitly Dilwale Dulhania Le Jayenge. [Though references to DDLJ are sprinkled throughout, one need not have seen that movie in order to appreciate HSKD.] This requires Dhawan to carry the film with his dancing, crying, and goofing around, and he’s more than up to the task.

Dhawan plays Humpty Sharma, a good-natured college student prone to slacking off. He’s destined to take over the campus bookstore from his tolerant father (Kenny Desai), so why push himself in school? Humpty’s constant companions are Shonty (Gaurav Pandey) and Poplu (Sahil Vaid).

The trio are busted by Kavya (Alia Bhatt) when they try to extort passing grades from their history professor, her uncle. When Kavya agrees to fix their grades behind her uncle’s back in exchange for a bribe, the guys recognize a kindred spirit and friendship blossoms.

Humpty and Kavya fall in love, even though she’s engaged to an American guy she’s never met. Humpty must convince Kavya’s father (Ashutosh Rana) to let him marry Kavya instead of her betrothed, Angad (Siddharth Shukla), a nearly impossible task given that Angad is perfect.

Angad’s perfection sets up some especially funny scenes. Despite his loyalty to Humpty, heterosexual Poplu finds himself becoming enamored of Angad’s winsome demeanor, delicious cooking, and chiseled abs. Big thumbs up to the casting department for hiring Shukla, who looks like Superman.

Angad is also great for driving home the film’s theme that most people aren’t perfect, but that doesn’t preclude us from being loving partners or from striving to be better versions of ourselves.

In an effort to differentiate Angad from Humpty, debutant writer-director Shashank Khaitan finds the right balance in making Humpty flawed but likeable. None of his weaknesses are deal breakers, and values like love and loyalty govern all of his decisions.

Kavya is likewise written with a moral code. Her sense of justice is what first appeals to Humpty, making up for her short fuse and selective materialism.

Bhatt — whose had an even stronger start to her career than Dhawan after debuting alongside him in Student of the Year — is very good again, especially in quieter interactions between Kavya and Humpty. It’s a shame that her character’s dynamism is sublimated in the second half. Humpty must try to save their relationship mostly by himself, whereas he and Kavya had been partners to that point.

Strong performances by Pandey and Vaid augment Dhawan’s performance and reinforce Humpty’s status as a good guy. The supportive and empathetic women of Kavya’s family make the story feel complete.

The story’s weakest point is that some of the supporting characters are denied satisfying conclusions, or any conclusion at all. Khaitan so effectively populated this universe that the movie becomes about more than Humpty’s and Kavya’s will-they-or-won’t-they romance.

But for light romantic comedy, HSKD hits the spot. It has some inventive dance numbers and strong turns by a pair of Bollywood’s brightest up-and-comers. It’s definitely worth a watch.