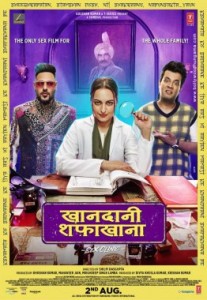 Buy the soundtrack at iTunes

Khandaani Shafakhana is like a half-finished topiary. The general shape is there, but it needs a lot more trimming.

Sonakshi Sinha stars as pharmaceutical sales representative Baby Bedi. Her job supports her mother (Nadira Babbar) and her loafer younger brother — the unfortunately named Bhooshit (Varun Sharma) — following her father’s death. Dad took out a loan from his greedy brother (Rajiv Gupta), and now Uncle wants to take possession of the family’s home and kick them out.

An opportunity arises in the wake of another death, that of Baby’s estranged maternal uncle Mamaji (Kulbushan Kharbanda). Mamaji was notorious for running a fertility clinic in a town where just saying the word “sex” is considered obscene. He bequeathed his clinic to Baby, on the condition that she hire a doctor and operate the clinic for six months in order to conclude his patients’ treatments. After that, she’s free sell the property, paying off her father’s debt and leaving her with enough money to start her own herbal medicine franchise. If she fails, the clinic goes to the medical school that kicked out her uncle decades earlier.

Returning to Mamaji’s clinic — inexplicably covered in cobwebs even though he’s only been dead a few days — brings back childhood memories of learning about traditional Unani medicine at her uncle’s knee. Her first meetings with patients to talk about their erectile dysfunction issues are profoundly awkward, but Baby realizes the positive impact of her uncle’s treatment on their lives. This reawakens her own dormant dreams of becoming a doctor and inspires her to destigmatize the topic of sexual health in her prudish Punjabi town.

Sinha’s warmth in the film’s thoughtful moments feels so natural, and her character builds endearing relationships. Sinha deftly guides Baby through a complicated journey as she considers what she really wants from life. Comedy might not be Sinha’s strongest suit, but the jokes in Khandaani Shafakhana are pretty subdued anyway. Nor are they especially bawdy.

The moderate tone does a world of good for Sharma, whose comic performances tend to be over-the-top. Annu Kapoor is funny as Mamaji’s lawyer, and Priyanshu Jora is adorable as a lemonade vendor hired by the lawyer to spy on Baby to ensure she fulfills her part of the deal.

But Khandaani Shafakhana falls short of success for a few reasons. It’s overly long, first of all. By the time Baby hits her lowest point, I was ready for the whole thing to be done. The resolution to Baby’s crisis feels convenient and unrealistic.

Some aspects of the movie felt like they didn’t quite translate, not so much as a matter of language but culture. (The English subtitles are actually quite good, including a funny joke about one of Baby’s suitors being handsome “like Al Pacino.”) The film’s primary audience in India will likely be more familiar with the particulars of Mamaji’s Unani medicine than a Western audience, so much about it is left unexplained. But the characters periodically give each other meaningful looks, and I wasn’t sure what the meaning was supposed to be. This is not a good starter film for Bollywood newcomers.

Then there’s Khandaani Shafakhana‘s biggest problem — one that can hopefully be edited out of the version that makes it to Amazon Prime. Bhooshit is discussing one of Baby’s patients with her: a famous rapper named Gabru Ghataak (Badshah). Bhooshit speculates that, because Gabru is always surrounded by beautiful women, the reason for the rapper’s erectile dysfunction must be that he’s a “homo.” Bhooshit says the slur in English, so it’s not a translation error. He also repeats it several times, indicating that director Dasgupta and writer Gautam Mehra intended the scene to be humorous. It’s an unfortunate scene that can easily be excised from the movie without ruining the story flow. In fact, in a movie that’s already too long, axing it could help in more ways than one.