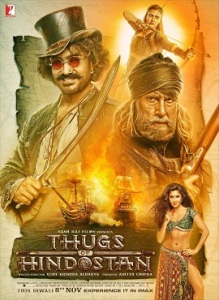 Despite its novelty as a rare Bollywood seafaring epic, Thugs of Hindostan is done in by  predictable character development and a familiar plot focused too heavily on its male protagonists.

The film begins promisingly enough, with Ronit Roy playing the leader of the last Indian kingdom to resist takeover by the British East India Company in 1795. After instructing his young daughter Zafira (played by fierce little Deshna Dugad) on the importance of protecting her homeland, King Mirza plans to attack the Brits at dawn, but the Company’s merciless lead officer Clive (Lloyd Owen) attacks first. Only Zafira escapes with the help of the royal family’s devoted bodyguard, Kattappa…er, Khudabaksh (Amitabh Bachchan).

Fast-forwarding eleven years introduces the swaggering trickster Firangi (Aamir Khan). Firangi’s name means “foreigner,” explaining his willingness to pit Indians against Indians and Brits against Indians, all in the name of making a buck. He has no allegiance to the burgeoning resistance movement threatening the Company, making him the perfect spy to gather information on behalf of Clive’s second-in-command, Officer Powell (Gavin Marshall, who coordinated the circus acts for Dhoom 3, which also starred Khan and was directed by Thugs director Vijay Krishna Acharya).

The rebel leader “Azaad” (“Free”) is really Khudabaksh, assisted by grown up Zafira (Fatima Sana Shaikh), who’s become a deadly fighter. The name Azaad is confusing, because it’s hard to tell when the rebel army shouts the word if they’re cheering for the man specifically or the concept of freedom, generally. This is significant because the first character we see in the movie is Zafira as a girl. Thugs should be her revenge saga, but Khudabaksh appears to get all the credit for attacking the Brits — unless the masses really are cheering for freedom and not just for him. Either way, crown princess Zafira winds up playing second fiddle to her bodyguard.

As is the case for many Hindi films, the challenge in Thugs is weighing the needs of the story against the needs of the stars. The stars’ needs clearly trump the narrative in this case. Without Khan or Bachchan — and perhaps with an actress with a longer resume than Shaikh’s — Zafira would be the main character. But one feels a calculus governing the whole plot, and that’s ensuring that the biggest stars get the most screentime. For example, Khan must be onscreen for three-fourths of the movie (I’m estimating), Bachchan for less (but he gets more dramatic entrances), etc. That limits the scope of what other characters are able to do and diminishes their importance.

That calculus is responsible for the absurdly lazy incorporation of Katrina Kaif’s dancer character Suraiyya into the plot. She’s summoned out of the ether as the screenplay demands, with no attempt to make her feel like a person who exists when she’s not onscreen. She’s a character designed for item numbers, nothing more. It’s a shame because Kaif is captivating in her brief dialogue scenes, and there had to have been some way to further utilize the grace and athleticism she displays in the songs “Suraiyya” and “Manzoor-e-Khuda”.

Shaikh is likewise underutilized, despite having the most compelling emotional arc. She and Kaif share a nice moment in which their characters discuss the dangers of revolutionary action (after telling Khan’s chatterbox character to shut up). The film’s high point is a touching scene in which Zafira mourns her family, and Khudabaksh sings her to sleep as he did when she was a girl. The film is lessened for putting Zafira’s thirst for vengeance second to the question of whether Khan’s Captain Jack Sparrow-lite character will finally become a good person (of course he will).

One point in Thugs of Hindostan‘s favor is that they cast British actors who don’t sound ridiculous speaking Hindi, which is not common practice in Bollywood. There are good supporting performances by Roy, Sharat Saxena, and Mohammed Zeeshan Ayyub as Firangi’s psychic sidekick. Ila Arun has the only other female role of note, giving a funny turn as Jaitumbi, a potion-maker with a crush on the much-younger Firangi.

Thugs of Hindostan has one of the biggest budgets of all time for a Bollywood film, and it gets quite a lot of value for the money. Battle scenes are fun and clever, set against stunning backdrops. The leather armor worn by Zafira and Khudabashk is gorgeous, designed by Manoshi Nath and Rushi Sharma. Dance numbers are grand in scale.

High production values coupled with decent story pacing are enough to maintain interest while watching Thugs of Hindostan, even if its narrative deficiencies make it ultimately forgettable.