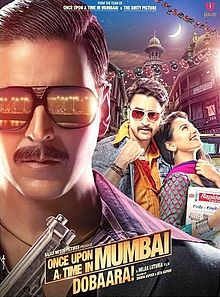 2010’s Once Upon a Time in Mumbaai raised interesting questions about the necessity of violence in organized crime and the role police have in protecting civilians. Its sequel, Once Upon Ay Time in Mumbai Dobaara!, revisits the same characters and locations, but ignores moral quandaries in favor of glitzy romance. The sequel doesn’t live up to the quality of the original.

Once Upon Ay Time in Mumbai Dobaara! (OUATIMD, henceforth) picks up twelve years into the reign of the sadistic Mumbai don, Shoaib (Akshay Kumar). He falls in love with a naive, aspiring actress named Jasmine (Sonakshi Sinha), whose innocence softens the don’s heart. At the same time, Jasmine strikes up a romance with Shoaib’s loyal underling, Aslam (Imran Khan), who tells her he works as a tailor. Neither man knows that they love the same woman, but when possessive Shoaib discovers the truth, boy, is he angry.

The casting in OUATIMD presents a problem from the outset. In the original film, Shoaib is played by Emraan Hashmi, an expert at depicting volatile, unsavory characters. Kumar makes his money these days playing comic goofballs and fails to make Shoaib as menacing as he needs to be. I agree with critic Mihir Fadnavis, who states in his review of OUATIMD that Kumar “sounds like a drunk Yogi Bear.”

Kumar’s not solely at fault for failing to make Shoaib appropriately villainous. Director Milan Luthria and writer Rajat Arora assume that audience members vividly recall the first movie and will apply that foreknowledge to Shoaib 2.0. But the character presented in OUATIMD is a smug, lovesick dope for the majority of the movie. His table-flipping freak-out when Jasmine informs him that she finds him strictly Friend Zone material seems out of character, unless one recalls the ruthless Shoaib from the first movie.

Requisite familiarity with the first film comes up in another odd way in OUATIMD. Shoaib’s girlfriend in the first movie is a woman named Mumtaz. Her character returns in the second as Shoaib’s kept woman, living in a luxurious apartment, but never allowed outside by the jealous don. Her presence is awkward and unnecessary, although she does give a touching speech near the end of the film about personal freedom and the fact that true love can’t be bought.

Jasmine echoes the same sentiments as Mumtaz, and Sinha does a nice job portraying a woman’s fear in the face of a man’s relentless romantic pursuit. In fact, the final half-hour of the film is really entertaining. Unfortunately, it comes about an hour later than it should have, given the amount of romantic fluff that could’ve been excised without damaging the story.

Imran Khan’s performance grew on me through the course of the film, but I’m still not sure that he was the right actor to play Aslam. He just seems too nice to play a street-hardened thief. Khan may have seemed more natural in the role had the makeup and wardrobe departments not turned him into a cartoon character. It’s hard to look beyond Aslam’s mesh tank tops, fake sideburns, feathered hair, and guyliner to appreciate the character beneath.

With a little editing and more appropriate casting, OUATIMD could’ve been pretty good. As it stands, the sequel’s shortcomings serve to reinforce what a superior movie Once Upon a Time in Mumbaai is.