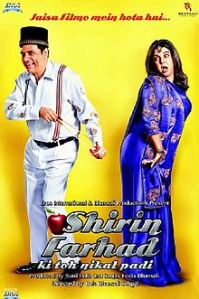 This will come as a shock to many moviegoers (and moviemakers): rich, attractive twentysomethings aren’t the only people who fall in love. Shirin Farhad Ki Toh Nikal Padi (“Shirin and Farhad Made It”) bucks conventional romantic comedy protocol to tell a love story about a pair of awkward fortysomethings who fall in love for the first time.

Boman Irani plays Farhad Pastakia, a nice guy who has never been able to find the right girl. Farhad’s lack of romantic success is partially due to his shyness, but his main problem is that he sells women’s underwear for a living.

Farhad’s career is inevitably the deal-breaker in meetings with the families of prospective brides arranged by his well-meaning mother, Nargis (Daisy Irani), and his busy-body aunt, Beroze. His job certainly doesn’t help him at the matrimonial mixers staged by the local Parsi community.

The Parsi community is almost a character in its own right in the film. Every meeting or mixer organized by the Parsis (an Indian community who practice Zoroastrianism) descends into a brawl. The scenes are silly but give a sense of the social obstacles preventing Farhad from meeting a nice Parsi girl.

One of the committee members trying to keep the Parsis from killing each other is Shirin Fugawala (Farah Khan). She and Farhad meet initially at his underwear shop, and they hit it off later at a Parsi mixer. Little does Farhad know that Shirin is the committee member who ordered the destruction of an illegal water tank in Farhad’s mother’s kitchen. When Nargis realizes that her son has fallen for her sworn enemy, she forbids Farhad from marrying Shirin.

The source of the conflict is kind of weak, although it is funny that Nargis holds such a grudge over being caught doing something illegal. She’s emotionally invested in the water tank, which serves as a reminder of her late husband. Farhad’s grandmother, who lives with Farhad and Nargis, isn’t about to let something so trivial stand in the way of her grandson’s happiness.

Boman Irani is always entertaining. Though he primarily works in Bollywood as a supporting character actor, his versatility allows him to give nice-guy Farhad both vulnerability and playfulness. Irani is charming and performs to his usual high standards.

Farah Khan is likewise an unconventional choice for a lead actress. Best known as a director and choreographer, Khan usually plays herself in front of the camera. Khan is great as Shirin, a woman who isn’t single because of any flaws, but because she has more important priorities than marriage. Shirin gets along so well with Farhad initially because she’s under no pressure; she’s sure the relationship isn’t going anywhere.

Overall, the film is more amusing than laugh-out-loud funny, though there are a few great lines. Early on, a well-meaning aunt tries to find a date for Shirin, and each bachelor in her stack of photos is older than the next. The aunt points to a picture of one old-timer and says, “He’s young at heart. He just underwent a bypass.”