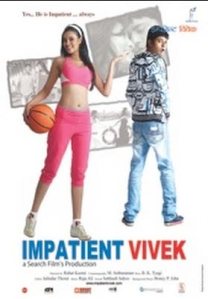 I’ve wracked my brain for something nice to say about Impatient Vivek. The best I’ve got is that writer-director Rahat Kazmi must be a talented pitchman, since he convinced someone to produce such a stupid movie. Impatient Vivek is so laughably bad that it nearly achieves so-bad-it’s-good status, thanks in large part to the most poorly translated English subtitles I’ve ever seen.

Impatient Vivek‘s problem stems from the fact that it has no plot, or at least not a plot in the traditional cinematic sense. It jumps right into the action without introducing the characters. Thus, it’s just confusing as the film begins with the titular Vivek (Vivek Sudershan) stealing money from his parents to take his nerd buddies on vacation to Goa, where they break into song.

What exactly is the audience supposed to feel at this point? All we know about the main character is that he’s a thief. Are we supposed to be happy for him?

Vivek falls for a girl named Shruti (Sayali Bhagat), who has no interest in him, likely because he attempts to woo her by communicating via a hand puppet. Two years pass, they meet again and she’s still not interested (probably because of his persistent interest in amateur puppetry).

In fact, Shruti’s engaged to some American guy. Her estranged older half-brother, Anu (Rannaoq Ahuja), returns to India from Canada to celebrate.

Suddenly, Anu becomes the focal point of the story. He tries to romance one of Shruti’s friends, and there’s a subplot involving Anu’s jealous half-brother. Shruti doesn’t reappear until Vivek kidnaps her on her wedding day, in yet another anti-heroic blunder.

When Shruti falls for Vivek — despite his being an immature criminal jackass — it just makes sense. It’s the natural conclusion to a movie in which a bunch of unlikeable characters behave in ways contrary to the ways real people behave.

The story isn’t the only problem in Impatient Vivek. The acting is uniformly terrible; the feeble attempts by the lead actors to muster tears are hilarious. Dance numbers are lame, sets look cheap and the editing is awkward.

But the highlights of Impatient Vivek are its nonsensical subtitles. The dialogue transcriber is clearly not fluent in English — and maybe not Hindi, either — as is evidenced by innumerable grammatical errors, misspellings and a general failure to convey meaning. For example:

Huh? Given the amount of translation needed from broken English into actual English, I might’ve had an easier time figuring out what was being said if I’d ignored the subtitles and just used my own Hindi-English dictionary, instead.