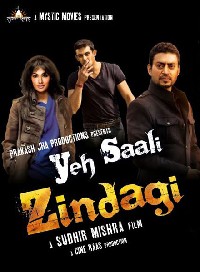 Yeh Saali Zindagi (“This Darn Life”) is a modern attempt at film noir that goes overboard with the “noir.” Many scenes are so dark that you can’t tell what’s happening.

It’s one thing when visual darkness is meant to conceal dark deeds, such as when the hero, Arun (Irrfan Khan), sees the lounge singer he loves, Priti (Chitrangda Singh), kissing another man in a shadowy hallway. Arun then uses the cover of night to follow Priti and the man, only to see her and her new beau kidnapped by a gang of thugs.

But the majority of the time, the darkness onscreen just seems like a failure to provide adequate lighting for the shot. Inside the cell where the lead thug, Kuldeep (Arunoday Singh), hatches a plan to spring his boss, Bade (Yashpal Sharma), from jail, the light coming in from the windows isn’t strong enough to illuminate the faces of the schemers, even if it is atmospheric.

More clumsy is a later scene on a balcony in which Kuldeep, recently freed from jail, frets about his failing marriage to a corrupt jailor, Satbeer (Sushant Singh). The sun is behind the actors, so there’s no way to see Kuldeep’s expression as he breaks down; the only way to interpret his anguish is from his sobbing. If I were one of the actors, I’d be upset that no one could actually see my performance.

The story unfolds through the parallel experiences of Arun and Kuldeep. Kuldeep mistakenly kidnaps Priti, thinking she’s the politician’s daughter engaged to Shyam (Vipul Gupta), the man Arun saw in the hallway with Priti. When Kuldeep and his gang realize their mistake, they don’t have a Plan B. Instead, they rely on Priti to come up with a way to get their ransom: Bade’s freedom.

Given how inept this gang is, it’s a wonder Priti doesn’t go straight to the police when she’s allowed out of their hideout. Instead, she turns to Arun. But she really believes the gang will kill Shyam, so she plays her part and returns to the hideout. The fact that they’re willing to let her live, despite the fact that she knows their identities, indicates that perhaps they’re not really up for murder.

Shyam’s unwillingness to try to help himself further removes any urgency from the situation. It’s not clear what Priti sees in him, other than the fact that she thinks he’s rich (he’s not). Once she learns that he’s broke, why not split?

There’s not much in the way of action, as Arun’s rescue attempt primarily involves bank transfers. The characters and side plots are only okay, the music unremarkable. Couple all that with the shadowy cinematography, and there’s just not much in Yeh Saali Zindagi to hold one’s attention.