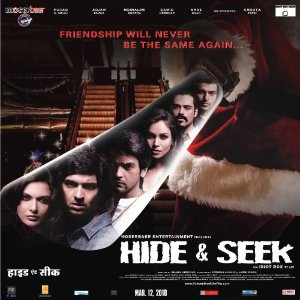 I am a coward when it comes to horror movies, so I was pleased to find Hide & Seek: a horror movie tame enough that I could actually watch it, instead of just covering my eyes with my hands.

The premise of the film is conventional: something went terribly wrong at a Christmas party among a group of six teenage friends, and twelve years later — when the pals are all around thirty — a killer takes revenge against the former pals.

Hide & Seek reveals a huge casting mistake early on by using two different sets of actors to play the characters as young adults and as thirty-somethings. At the time of the party, all of the characters have obviously gone through puberty, so they’re not going to change much in appearance in the span of a dozen years (apart from stylistic choices and a few pounds gained or lost). But none of the young actors look anything like their older counterparts. As more mature adults, one of the women is taller than a man who used to tower over her.

The opening credit sequence features a montage of clips from the Christmas party before the actions shifts to the present, twelve years later. I spent the first half-hour of the movie trying to reconcile which adult characters were supposed to be which teens from the party footage, in addition to what the relationships were between the characters then and now. Rather than keeping track of six characters, it was like keeping track of twelve.

The confusion could’ve been avoided by changing the time frame a bit, employing a single set of actors to play, say, 22-year-old college students and 34-year-old professionals.

The main character is Om (Purab Kholi), who spent twelve years in a mental asylum, after the events of the Christmas party. Shortly after he’s released, his old flame, Jyotika (Mrinalini Sharma), contacts him and he receives a cryptic message. The other party attendees — Om’s brother, Abhi (Sameer Kochhar); wallflower Gunita (Amruta Patki); thug Jaideep (Arjan Bajwa); and Jaideep’s former lackey, Imran (Ayaz Khan) — all receive the same message. Everyone is kidnapped and locked in a shopping mall.

A villain dressed as Santa Claus explains via video that they must play a game of hide and seek. If they try to escape, Santa will kill them. Om and Jyotika run off to hide together while Gunita, Jaideep and Imran go their separate ways. Abhi promises to come find them all after twenty minutes.

As the bewildered former pals try to figure out why they’ve been kidnapped and who’s wearing the Santa suit, old rivalries come to the surface. Flashbacks to the party slowly reveal what happened that night and who’s behind the deadly game playing itself out in the mall.

The idea of being punished for past crimes is nothing new, but there is some degree of ambiguity to the actions of some of the friends. I’m not so sure they all deserve to be punished, but, then again, I’m not a homicidal maniac.

This is not a movie for serious horror movie fans. It’s not scary, and it’s not even that atmospheric. But, if the mere sight of Freddy Kruger is enough to give you nightmares, Hide & Seek is a watchable baby step into the world of horror movies.