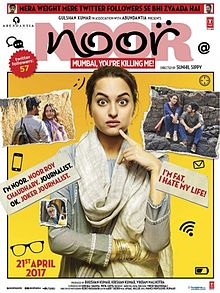 Buy the DVD at Amazon
Buy the book at Amazon

Noor is almost a good movie. It looks nice, and the talented cast members make their characters relatable. The film just never comes together in a coherent way.

The challenge with Noor is condensing a book’s worth of material into a movie of less than two hours, a feat which director Sunhil Sippy and co-writers Althea Kaushal and Shikhaa Sharma can’t manage. The threads of the various subplots never tie together in a way I’m guessing they do in Saba Imtiaz’s well-regarded novel Karachi, You’re Killing Me, upon which the film is based.

Noor (Sonakshi Sinha) is a Mumbai journalist plagued in equal parts by self-loathing and a smug sense of superiority. She films human interest stories for an online news outlet, but she’d rather be reporting on more serious issues. Her disdain for her interview subjects is so obvious that any organization would be foolish to entrust her with any topics of import.

When Noor is not blaming her editor Shekhar (Manish Chaudhary) for consigning her to a Pulitzer-less fate, she’s complaining about how no one pays attention to her while simultaneously rebuffing everyone’s attempts to reach out to her. We have to trust that the patience shown by her buddies Zara (Shibani Dandekar) and Saad (Kanan Gill of Pretentious Movie Reviews) was earned during a time when Noor wasn’t such a self-pitying grump. She’s also obsessed with her weight, a hopelessly outdated gag used so often it seems malicious.

Things finally start going Noor’s way when she falls for Ayan (Purab Kohli), a handsome international photojournalist. Then she gets a lead on what could be a huge scandal.

“Could” is the operative word. All Noor has is an interview with one alleged crime victim, yet she wants Shekhar to publish it as proof of a widespread conspiracy. Shekhar insists that they wait, but not so that Noor can gather more evidence. He wants her to think about the potential negative impact publishing it would have on her interview subject.

That’s certainly one element to consider, but there’s a larger view of journalistic ethics that gets completely ignored. What Noor has is the first germ of a story, not a complete investigation. She has zero corroborating evidence, but none of the characters acknowledge that as a problem. Publishing what she has as unassailable proof of corruption is inviting a defamation lawsuit.

Movies about investigative journalism can be riveting — seeing how badly Noor handles it made me want to watch Spotlight again — but Noor never fully shifts into being the thriller it needs to be to deal with the can of worms it opens. Trying to integrate Noor’s low-stakes romantic troubles into the high-stakes crime narrative doesn’t work.

It’s a shame, because Sinha does a nice job humanizing a complicated character. Kohli is charming, and Gill is funny and adorable. Sadly, Zara is written as little more than a walking clothes rack, so we don’t get to see what Dandekar can do.

Sippy uses some clever techniques to depict Noor for the Millennial she is. When Noor speaks in hashtags, they appear written on screen next to her. Sippy positions his own camera over Noor’s shoulder and focuses on her iPhone screen so that we can see what she sees while she records her interviews.

While Noor is certainly watchable, the cloud of what-might-have-been always hovers over it.