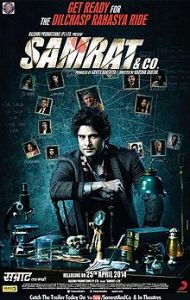 As a fan of the hit British TV series Sherlock, a Bollywood version of the same sounded like a disaster. Thankfully, Samrat & Co. is watchable, but just barely.

Bollywood’s Sherlock is Samrat (Rajeev Khandelwal), a detective who relieves stress by partaking in underground boxing matches. Lest the audience get a bad first impression, Samrat explains that his illicit prize money goes to charity. Never mind that boxing seems like a ridiculously dangerous pastime for a man who relies on his intellect to solve crimes.

The “Co.” of Samrat & Co. is just one guy, tabloid TV host Chakrandhar (Gopal Dutt). Just to make absolutely clear that the filmmakers know that they are making a Sherlock knockoff/tribute, Chakrandhar says, “I’m Watson, and he’s Sherlock.”

Apart from a story focused on a brilliant detective and his sidekick, Samrat & Co. has little in common with Sherlock. There are none of the visual effects that define the British series, except for one instance in which the solution to a word puzzle briefly floats on screen. (The film’s few puzzles are simple, and watching a character as supposedly brilliant as Samrat struggle with them is frustrating.)

Khandelwal’s Samrat is a normal guy, as socially at ease as Benedict Cumberbatch’s Sherlock is awkward. It’s the supporting cast — like dim-witted Chakrandhar and chatterbox maid Shanti (Puja Gupta) — whose attempts to add quirkiness to the movie prove more irritating than endearing.

The central mystery involves a rich man in Shimla — Mahendra Pratap Singh (Girish Karnad) — whose garden appears to be cursed. After Singh is murdered at his own birthday party, Samrat sorts through numerous suspects to find the killer.

The movie’s cast is huge, and there are way too many potential suspects to keep track of. When Samrat zeroes in on Deepak (Rajneesh Duggal) as a potential culprit, I was hardly sure who Deepak was. His character is introduced while Samrat scans some CCTV footage, and they have one brief conversation before their showdown. The showdown itself includes a bout in the world’s least safe fighting arena, perched on a cliff’s edge and ringed by a wooden picket fence. The insurance premiums must be outrageous.

Kandelwal’s performance is fine, but it’s not especially compelling. Madalsa Sharma is tolerable as Dimpy, Singh’s daughter and Samrat’s sort-of love interest. There’s not much to commend any of the supporting actors besides Shreya Narayan, whose character, Divya (Singh’s other daughter), is refreshingly mute.

As flawed as Samrat & Co. is, it deserves credit for trying something a little different. Mystery isn’t a common Bollywood genre, so the movie at least offers a change of pace. Samrat & Co. is neither great nor terrible.

There’s a great line in Filmistaan that sums up the frustrating nature of the tension that has persisted between India and Pakistan since Partition in 1947. The film’s kidnapped Indian protagonist, Sunny (Sharib Hashmi), is surprised at being told he’s been secretly brought to Pakistan: “The food, the people all look the same. How would I know?”

That theme of commonality runs throughout Filmistaan. The movie beautifully makes its point that manufactured borders can’t erase the cultural similarities that unite the people of India and Pakistan, and that it’s the average citizens of both countries who pay the price for ongoing hostility.

Sunny is the consummate regular guy. He’s an out-of-shape, out-of-work wannabe actor who admits he doesn’t have the chops to make it in Bollywood. But he persists, taking the job of Assistant Director as a way into the industry.

On assignment with an American film crew, Sunny is kidnapped near the Pakistan border in Rajasthan. The militants leave him with a pair of guards in a small village across the border, hoping to nab the more valuable Americans on a second try.

Sunny endears himself to the village children with his impressions of Bollywood stars. His love for film sparks a friendship with Aftaab (Inaamulhaq), a movie buff and DVD pirate. And Sunny’s sheer ordinariness leads the younger of his two captors, Jawaad (Gopal Dutt), to question why they’re holding him in the first place.

Jawaad’s willingness to question orders — in stark contrast to his devout compatriot, Mehmood (Kumud Mishra) — gets at one of the movie’s other themes: the crippling effect of a lack of opportunities in Pakistan. The only reason Jawaad joined the militants and the only reason Aftaab is a film pirate and not a filmmaker is because of a lack of opportunity, caused primarily by the closed border with India and the zealots like Mehmood who want to keep it closed.

Filmistaan is hopeful about the prospects that young people from both countries will someday cast aside national hostilities in exchange for a future built on shared goals and cultural history. The subtlety with which it conveys this message through its story and characters heightens its impact.

Since Filmistaan is also a celebration of the movies, it excels in all the necessary ways. The acting is top-notch. Sets are stark and evocative, thanks to writer-director Nitin Kakkar and cinematographer Subhransu. The soundtrack is terrific.

The story builds to a cinematic climax that sadly doesn’t allow for the emotional payoff one would hope for. Given the effort that went into making the audience care deeply about the characters, the ending needed to be more cathartic.

Still, that doesn’t negate the great journey that Filmistaan takes the audience on. This is a unique and enjoyable film worth seeing.