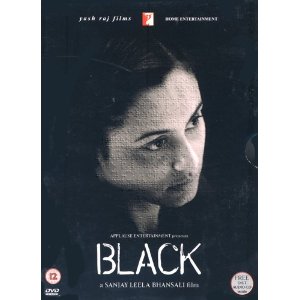 Buy the movie at Amazon

Most Americans are familiar with the story of Helen Keller, a blind and deaf girl who learned to communicate through the guidance of her teacher, Anne Sullivan. The play written about Keller & Sullivan, The Miracle Worker, is required reading in many middle schools. The play inspired filmmaker Sanjay Leela Bhansali to create the movie Black.

Black‘s heroine is Michelle McNally (played as a child by Ayesha Kapoor, and as an adult by Rani Mukerji), a girl robbed of her sight and hearing by an illness at a young age. The first half of the movie tacks closely to Keller’s life story. By age eight, Michelle has developed into a wild, almost feral child due to her inability to communicate. Her parents, equally frustrated by being unable to reach their daughter, are on the verge of sending Michelle to an asylum to prevent her from accidentally harming her baby sister, Sarah.

As a last resort, the McNally’s hire eccentric teacher Debraj Sahai (Amitabh Bachchan) to tutor Michelle. Early in the movie, Bachchan’s performance is almost too eccentric to be believable, as Debraj uses unconventional methods to reach out to Michelle.

Debraj is eventually able to teach Michelle the connection between words and objects, and she’s able to finally communicate with her family through sign language. She’s accepted into a university, and Debraj helps her to continue her studies and live on her own. This is where the story diverts from Keller’s biography and develops its own identity.

Michelle must deal with typical adult challenges in addition to her handicaps. She has a strained relationship with Sarah (Nandana Sen), who’s tired of living in her older sister’s shadow. When Sarah is finally able to command her parents’ undivided attention at her engagement dinner, she gives an uncomfortably honest toast, confessing to cruel acts she committed against Michelle.

Sarah’s engagement provokes confusing feelings in Michelle. She’s curious about romance, but the only man she knows is Debraj, who’s as much a father figure to her as he is a friend.

Of course, Michelle’s special needs make university a challenge. She’s too slow when typing answers to exam questions on a Braille typewriter, and she needs Debraj to translate lectures into sign language. Even though a cane increases her mobility and independence, she’s still unable to navigate the campus by herself. This puts her in grave danger as Debraj begins to manifest the signs of Alzheimer’s disease.

As inspirational as the first half of Black is, it’s most compelling to watch Michelle develop into a fully formed person. Keller herself went had an extraordinary life as an activist, in addition to introducing the Akita breed of dog to the United States. Mukerji’s performance is so captivating that it’s easy to forget that she doesn’t deliver any lines of dialog.

Bachchan is similarly spellbinding as Debraj confronts the emotional and ethical issues of tutoring a young woman, as opposed to a little girl. He struggles with a sudden decline in mental function that changes his relationship with Michelle. As he once reached out to her, she is forced to find a way to connect with him.

Besides the two leads, Black features a terrific supporting cast. Sen walks a fine line, showing the despair behind Sarah’s bratty behavior. And Shernaz Patel is wonderful as Michelle’s troubled mother, Catherine. She’s in an impossible situation, trying to protect Michelle even though it exacerbates the girl’s problems while trying not to overlook her other daughter. Catherine is heroic in her own right for not sending Michelle away and, in effect, covering her own eyes and ears to her child’s plight.