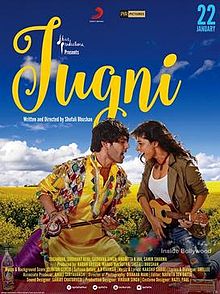 Writer-director Shefali Bhushan makes a promising debut with Jugni. Despite some plot hiccups, Bhushan’s film shows her knack for characterization and her passion for music.

The plot issues are present from the beginning. As the opening credits run, a woman travels from Mumbai to Hasanpur, a small town in Punjab. It’s a full twelve minutes before we learn that the woman is named Vibs (short for Vibhavari), played by Sugandha Garg, who’s gaining recognizability with roles in Patang, My Name Is Khan, and the Tere Bin Laden films.

Vibs is a rookie music director looking for fresh talent for a movie soundtrack. Her target is a lauded classical singer named Bibi Saroop (Sadhana Singh), but Bibi’s son Mastana (Siddhant Behl) gets to Vibs first. Mastana is also a singer, though his tastes are more modern than his mother’s. For example, the lyrics of his biggest hit on the local party circuit rhyme “kidney” with “Sydney”.

The amount of time Vibs and Mastana spend together rankles Preeto (Anuritta Jha), Mastana’s de facto girlfriend. She and Bibi worry that Mastana is reading too much into Vibs’ interest in him, letting Bollywood dreams cloud his vision.

Mastana is used to being the big fish in his small pond, so he’s certain his local fame will translate to success in Mumbai. Even when their song is a hit, Vibs cautions Mastana about the fickleness of the industry. Promises made in Mumbai don’t mean as much as they do in Hasanpur.

This city-versus-country conflict is at the heart of Jugni, not just in the way it governs careers but relationships as well. Preeto and Mastana aren’t officially girlfriend-boyfriend because they don’t need to be; it’s just a given that they will get married someday. On the flip side, Vibs shares an apartment with her boyfriend, Sid (Samir Sharma), but recent problems have rendered their relationship essentially an open one.

A night of passion between Vibs and Mastana holds different meaning for both of them. While Vibs treats it as a fling, Mastana considers it the foundation for a romantic relationship. Much like his dreams of success in Bollywood, he also envisions a future with Vibs and pushes Preeto aside to make way.

Refreshingly, Bhushan doesn’t take the side of either character, presenting them as complex young adults at a critical stage in their lives. Mastana is naive, but is he wrong to view sex with Vibs as a significant, possibly life-changing event? Vibs is nonchalant, but why shouldn’t two adults be able to have fun without it requiring a commitment?

One side-effect of this balanced presentation is a blurring of who the film’s main character actually is. That then clouds the ultimate goals for each character, making it hard to get a sense of where we are in the story at any given point. Not every movie needs to rigidly follow a traditional structure, but Bhushan shows enough familiarity with that structure that certain deviations just make things confusing.

As for the performances, Behl — who also gets an associate writer credit for Jugni — imbues Mastana with a mixture of innocence and arrogance. Garg has a challenging job because Vibs spends a lot of time listening to other people play music, and it’s hard to make that look interesting onscreen. Garg is good at portraying Vibs’ internal conflict, making her vacillation understandable without coming across as manipulative.

Jugni is an aesthetic delight for both eyes and ears. The movie looks lovely, thanks to cinematographer Divakar Mani. Clinton Cerejo provides a terrific soundtrack, with contributions from luminaries like A. R. Rahman and Vishal Bhardwaj.

There’s an awful lot to like about Jugni. I’m really interested to watch Shefali Bhushan grow as a filmmaker.