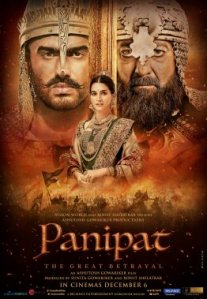 Panipat is made for a Hindi-speaking audience well-versed in Indian history, and it poses several challenges for audiences outside that demographic. If Panipat were a book, it would come with several maps, some family trees, and an extensive glossary. Absent those supplementary materials — and with subtitles that leave many important Hindi words untranslated (at least in the Netflix version) — I’ll do my best to explain what happens using terms that I think are close, if not completely accurate.

The film opens in the mid-18th Century, with the Maratha Empire finally defeating the Nizam Sultanate after a two-year-long campaign, shoring up its hold on the midsection of what is now modern-day India. The Emperor’s wife, Gopika Bai (Padmini Kolhapure), worries that military commander Sadashiv (Arjun Kapoor) is so popular that the people will push for him to be made head of state over her son, Vishwas (Abhishek Nigam). She convinces the Emperor, Nana Saheb (Monish Bahl), to take Sadashiv off the battlefield and appoint him Finance Minister.

Being a soldier, Sadashiv only knows how to solve problems by force. He attempts to shore up the empire’s dwindling finances by sending threatening letters to all the ancillary kingdoms that are behind on their tax payments. This upsets a Mughal noble, Najib-Ud-Daulah (Mantra), who asks the Afghan ruler Ahmad Shah Abdali (Sanjay Dutt) for help.

With Afghan forces headed south, Sadashiv agrees to lead the undermanned, under-resourced Maratha army north to stop them, since no one else wants to. The Marathas and the Afghans make alliances with the neighboring kingdoms on their respective journeys, culminating with a decisive battle at the fort of Panipat.

Most of the film is a slow road trip punctuated by natural disasters. Before that are the film’s prettiest scenes, set at the beautiful Maratha palace. The decor is vibrant, the grounds are beautifully landscaped, and the architecture is grand. Designer Neeta Lulla’s costumes are stunning.

At the palace, Sadashiv marries his spunky childhood sweetheart Parvati (Kriti Sanon), who joins him on the excursion. Sanon gives the best performance in the film, but her character is a transparent attempt to appeal to a modern audience. Parvati is a commoner who marries a royal. She’s the empire’s first woman doctor! She fights with a sword! Sadashiv begs her not to kill herself if he dies in battle, just to make Panipat seem more progressive than Padmaavat.

Kapoor’s performance is not particularly charismatic, but neither is Sadashiv as a character. He’s inflexible to the point of causing many of the empire’s problems — first with his heavy-handed letters and later with his refusal to negotiate with Abdali. Sadashiv insists that he’s fighting to protect all of Hindustan from Muslim invaders, even though Hindustan at the time was not a unified nation but a collection of kingdoms, some of which were ruled by Muslims.

Sadashiv serves primarily to illustrate Panipat‘s pro-Hindu viewpoint. The contrast between Sadashiv and Abdali is almost comical. Sadishiv fights in the heart of the battle while Abdali stays safely at the back. The Maratha army follows Sadashiv and endures starvation because they believe in his cause, while Abdali’s soldiers flee and his throne is usurped in his absence. Even Kapoor’s acting is calm and resolute compared to Dutt’s over-the-top delivery.

Panipat portrays the Afghans as essentially cavemen. Unlike the light, bright Maratha palace, Abdali rules from a dimly-lit, windowless great hall. Servants wearing fur cloaks carry platters laden with hunks of roasted meat. When Maratha Prince Vishwas is caught in battle by an Afghan soldier, the soldier is shown in close-up snarling like an animal.

Besides being problematic, Panipat just isn’t that interesting. Perhaps in the name of historical accuracy, the plot favors comprehensiveness over economy. Seemingly every lesser kingdom and minor noble is given a shout out, no matter how insignificant their part in the events that are the focus of the film. The result is a sprawling cast of characters who blur together. By the time any of them does something that affects the plot, I’d already forgotten who they were.

Perhaps this cast sprawl is less of a problem for the Indian audience for whom Panipat is obviously intended. I also understand if the English subtitles used in the original theatrical release chose to leave some Hindi words intact, as those subs are as much for moviegoers across India as they are for viewers outside of the country. I’m not sure if Netflix kept the original subtitles for its streaming release or created new ones, as is the practice of some streaming services.

But Panipat is a particular case where Netflix should have used the opportunity to make the film’s English subtitles as accessible as possible to its global audience. By not translating words like Peshwa, Gadir, and Wazir, it’s hard to understand the hierarchy of the region at that time. Even the geography is unclear, as Sadashiv seems to use Hindustan and the Maratha Empire interchangeably.

Again, maybe Indian audiences with the prerequisite cultural and historical knowledge found Panipat easier to understand than I did. As it is, it’s as uncompelling as it is inaccessible.