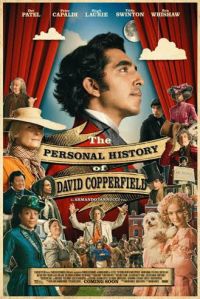 The Personal History of David Copperfield is tiring to watch. It’s mentally draining to spend two hours trying to determine what emotional reaction the filmmaker intends to inspire in the audience. It’s physically exhausting as well, following the frantic movements of handheld cameras while other shots tilt up at such a sharp angle it’s as though you feel your own neck straining. One needs to be well-rested before attempting to watch this film.

Writer-director Armando Iannucci and co-writer Simon Blackwell update the Charles Dickens novel with Dev Patel in the title role, narrating David’s life story to an audience in a theater. His tale follows the ups and downs of his life, starting with his happy childhood (young David is played by Jairaj Varsani), his fall into poverty, rise back to prosperity, and so on.

Much attention is paid to the colorful characters in David’s life, but with so much emphasis on their eccentricities that they never quite manage to feel like real people. David’s aunt, Betsey Trotwood, is played by Tilda Swinton. She’s introduced in one of the film’s earliest scenes smashing her nose up against a pane of glass. The message to the audience is: “You love when Tilda Swinton plays wacky characters, so here she is again!” Same for Peter Capaldi as chronically indebted Mr. Micawber and Hugh Laurie as befuddled Mr. Dick, who is obsessed with Charles I.

Besides Patel, Iannucci deliberately included other non-white actors in key roles, differentiating his film from the multitude of movies about Victorian England with all-white casts. But Inannucci doesn’t take this step toward inclusivity far enough to make his cinematic world feel truly multicultural. Of the twenty or so characters besides David with a significant number of speaking lines, only five are played by people of color. Except for David’s friend Agnes Whitfield (Rosalind Eleazar), the characters with the closest personal connections to David are all white.

The pace of the narrative forces David to speed through many of the significant events of his life before they’re able to make much emotional impact. Highs give way to lows and back to highs, all covered in a layer of wackiness that keeps the audience at an emotional distance.

Such briskness keeps David from evolving as a character as well. Things happen to him, he reacts, and then the story moves on to something else. Patel is fine in the role as it’s written, but David’s quirks — he frequently mimics the speech of the people around him — seem to substitute for character growth.

Working in the film’s favor are some nice performances, including a small but impactful appearance by Gwendoline Christie as David’s stepfather’s stern sister. Laurie as Mr. Dick and Eleazar as Agnes are charming. A delightful scene in which both of them have a picnic with David and Aunt Betsey provides a welcome respite in an otherwise exhausting film.

4 thoughts on “Movie Review: The Personal History of David Copperfield (2019)”