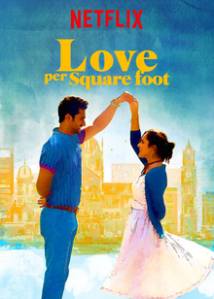 Sanjay is being strung along by his sexy boss, Rashi (Alankrita Sahai), and Karina is dating Sam (Kunaal Roy Kapur), a nice guy she likes but doesn’t love. When Sanjay and Karina hit it off at a mutual friend’s wedding, they realize that they can’t achieve their dreams if they stay with their current partners.

In order to take advantage of a government-sponsored housing program for newlyweds, Sanjay and Karina decide to apply together. They only have to get married if they win an apartment via a lottery draw, and even then, their arrangement is based on business rather than affection. They’ll split everything 50-50, from the costs of owning the apartment right down to household chores. That they start to fall in love with each other during the process is just a bonus.

The story takes its time establishing the relationship between Sanjay and Karina, which is great because Kaushal and Dhar are adorable together. Fresh off of his chilling turn as a crooked cop in Raman Raghav 2.0, Kaushal transitions seamlessly into an ideal romantic leading man. Dhar is effortlessly likeable and cute in her first film role.

Tiwari’s storytelling style is concise, with characters resolving problems that would normally stretch over several scenes with just a sentence or two. It’s refreshing, but it also creates the need to continually manufacture new conflicts in order to keep the story going. Problems aren’t born out of well-integrated subplots but rather spontaneously generate, and the story drags.

The two ex-lovers are one well Tiwari returns to, with Rashi’s demands on Sanjay’s attention becoming increasingly outlandish and less believable. As a character, Rashi is one-note, which is too bad because Sahai shows some charisma in her first film role. Kapur’s Sam has fewer scenes, but the actor makes the most of them.

Tiwari relies even more heavily on the main characters’ parents to complicate matters, chiefly on the grounds of religious objections to the union. Sanjay is Hindu and Karina is Christian, though neither seems especially devout. The sudden parental religious objections feel obligatory — as though one can’t make a Bollywood romantic comedy without them — and they don’t easily fit with the central modern love story. Despite having wonderful actors in the roles, all of the parents are unfunny caricatures.

The rookie writer-director must perfect his story crafting, but overall, Love Per Square Foot is a fine debut — not just for Anand Tiwari but for Angira Dhar as well.