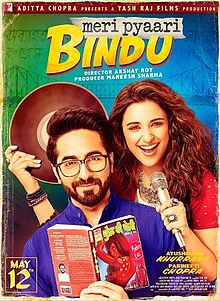 Meri Pyaari Bindu (“My Sweet Bindu“) puts a clever spin on a familiar story in a way that allows its talented lead couple to shine. Debutant screenwriter Suprotim Sengupta is one to watch.

Bollywood is awash in stories about a man who falls for a woman — often based on the woman’s appearance alone — who then makes it his mission to win the woman’s affections in return. These one-sided romances are often portrayed as a matter of destiny: the woman simply doesn’t realize that she’s meant to be with the man, so he must convince her. Meri Pyaari Bindu also tells a love story from a man’s perspective, but he is not some hero of destiny. He’s just a guy.

Abhi (Ayushmann Khurrana) is a successful — if slightly embarrassed — writer of pulp horror-romance novels living in Mumbai. He’s spent three years struggling to write a love story of literary merit. His concerned parents dupe him into returning to Kolkata in order to shake his writer’s block and force him to interact with the outside world once again.

The problem is Abhi’s obsession with “the one that got away”: Bindu (Parineeti Chopra), his childhood sweetheart. The mementos he finds in his parents’ home — most significantly a mix tape of old movie songs — prompt Abhi to write about his past with Bindu.

This version of the past is deliberately told from Abhi’s point of view, and it can’t be taken as a completely objective, even in his characterization of Bindu. In his recollection, the first thing she did upon meeting him was to hand him a pair of headphones, instructing him: “Listen to this. It will change your life.” The scene is a direct reference to Natalie Portman’s character in Garden State, one of the most commonly cited examples of the Manic Pixie Dream Girl trope — a free-spirited female character written as a romantic interest for a stuffy or depressed male character. The fact that Bindu and Abhi are six-years-old when this happens highlights the absurdity of Abhi’s perception of Bindu as his own personal wake-up-call.

As Abhi’s recollections progress forward in time, it becomes apparent to both him and the audience that there’s more to Bindu than her carefree persona suggests. She has plans of her own that may not include Abhi. Both of them learn as they get older that holding on too tightly to dreams that cannot be will only hurt the dreamer.

It’s a risky move to establish Bindu as a Manic Pixie Dream Girl, since it requires the audience to invest enough in her to enjoy the payoff as she is revealed to be a nuanced character in her own right. Sengupta successfully pulls it off, and in doing so tells an unconventional but totally relateable love story. Debutant director Akshay Roy shows a knack for commercial cinema in the way he interprets Sengupta’s tale.

Few actors do “exasperated” better than Khurrana, and he gets to deploy his best hangdog expression liberally in Meri Pyaari Bindu. He’s a fine match for Chopra, who gets a wider range of emotions to work with in the film, from spunky to defeated to resolute. Her performance during a scene in which Bindu faces harsh reality is particularly moving.

It’s refreshing to see a Hindi romantic-comedy that knows how to bend the rules of the genre to make something that feels new. Meri Pyaari Bindu trusts in the intelligence of its audience, and the audience is rewarded for watching it.