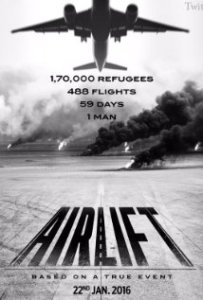 Buy the DVD at Amazon
Buy the soundtrack at iTunes

The evacuation of 170,000 Indian citizens from Kuwait following Iraq’s 1990 invasion is an inspiring tale that deserves a far better movie than Airlift. Writer-director Raja Krishna Menon’s version of events is a snore.

One of the perks of translating a real-life event to the big screen is that one can eliminate all the boring bits and focus on the drama. Instead, Menon forces the audience to endure interminable scenes of characters talking on phones, sitting in meetings, or waiting in hallways for meetings to start. It’s maddening.

Menon uses his creative license to condense the various heroes of the real evacuation into one man (because it’s always one man in Bollywood): Ranjit Katyal (Akshay Kumar). Ranjit’s character setup is pretty good. He’s quickly established as a hard-partying, unscrupulous businessman who encourages his Indian driver to embrace life as a Kuwaiti. Thus, we know that by the end of the film Ranjit will be a conscientious and generous Indian patriot.

Ranjit’s wife, Amrita (Nimrat Kaur), is almost always unhappy with her husband. When she’s not upset with his drinking, she’s mad that he’s putting the well-being of others ahead of her and their daughter. The role itself is not great, but Kaur is great in it. She’s head-and-shoulders above the rest of the cast, with an authoritative voice that commands respect.

The invasion of Kuwait opens with a startling blast and a few grim executions, but the tension subsides almost immediately. Iraqi troops lackadaisically trash stores and homes, and one makes a vaguely rapey gesture at a woman. The general in charge threatens Ranjit so nonchalantly that Ranjit’s not entirely sure that he’s being threatened.

For the most part, the Indians’ nationality protects them, since the Iraqi troops are only interested in harming Kuwaitis. With no end to the hostility in sight, the real problem is how to get about 170,000 Indian citizens — many poor laborers without passports — to safety.

As in many other Hindi movies, the enemy of progress is Indian bureaucracy. With the embassy staff having fled, Ranjit is stuck in Kuwait without knowing who to call. Sanjiv Kohli (Kumud Mishra) — the Foreign Office staff member who happens to take Ranjit’s phone call — is reluctant to help because the Gulf States aren’t his department.

Kohli’s character is a huge missed opportunity to inject energy into the film. He never so much as raises his voice at the succession of ministers who ignore him, content instead to wait quietly outside their offices. Mishra delivers his lines at a snail’s pace, as though trying to lengthen his time on-screen.

Whereas Kohli represents a missed opportunity, another supporting character exists only to annoy. Mr. George (Prakash Belawadi) is an unrepentant curmudgeon who complains through the whole film. His only contribution to the plot is that he finally pisses off Amrita so bad that she yells at him on Ranjit’s behalf. He’s far too irritating for that one scene to justify his presence.

The only supporting character worth a darn is Ibrahim (Purab Kohli), a helpful guy whose subplot gets a touching payoff at film’s end.

Part of Menon’s problem in adapting the story for Airlift is one of scale. He condenses the heroes of the story into one character, but still makes that character responsible for all 170,000 Indians in Kuwait. How is it possible for all of them to be living on the grounds of a single school simultaneously? How many cars would be needed to drive all of them across the border in one night?

It would have made more sense for Ranjit to be in charge of a few thousand evacuees, with his efforts setting the template for the rescue of the rest of the Indians in Kuwait. Making him responsible for all 170,000 people highlights logical impossibilities that can’t be ignored.