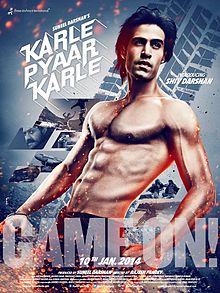 Buy the soundtrack at Amazon

At times, Karle Pyaar Karle (“Fall in Love,” according to the translation of the title song’s lyrics) veers into So Bad, It’s Good territory. I almost want to recommend it, but the movie is so inept and offensive that I can’t.

Karle Pyaar Karle is primarily a vehicle for producer Suneel Darshan to launch the acting career of his son, Shiv. Therein lies the problem. Shiv Darshan doesn’t have the acting chops to be a leading man. A gym membership does not a hero make.

Darshan the younger plays Kabir, the human equivalent of Poochie the Dog from The Simpsons: full of attitude and brashness, so desperate to come off as cool that he winds up a total dud instead.

Kabir has the emotional IQ of a potato, and he jokes inappropriately throughout the whole film. Director Rajesh Pandey is so insecure in Darshan’s ability to be funny that he gives Kabir a pair of toadies who laugh at everything he says. An example of Kabir’s comic genius: “Don’t pass gas, and stop acting like such an ass.”

Kabir’s only truly funny moments are when Darshan tries to emote.

College-guy Kabir returns to his hometown after a fifteen year absence, following that one awkward time that he stabbed his best friend’s step-dad. Kabir’s frequent run-ins with the law have kept the family from settling down, yet Kabir has the nerve to be upset when his mom asks him to stay out of trouble. He later blames his wild ways on his mother’s inability to control him. What a guy.

Kabir sees his now-grown-up-and-hot friend — the one with the skewered step-dad — Preet (Hasleen Kaur), but she doesn’t recognize him. Following some ridiculous banter that results in him getting a lap dance at a blood drive, Kabir corners Preet in the empty school library. He pins her hands behind her back, bends her over a table, and essentially threatens to rape her until she begs for her freedom.

As Preet flees the library, she realizes who Kabir is and runs to hug him. WTF?! It doesn’t matter that Kabir knew he wasn’t going to rape her. Preet feared she was going to be raped, yet she forgets about it entirely within ten seconds.

Karle Pyaar Karle has a lot of issues with the way it depicts women. Preet’s entire wardrobe is skimpy club-wear, and every white woman in the movie wears a bikini-top. When Preet catches Kabir seducing another woman out of her clothes to win a bet, Kabir calls Preet a slut for having spent time with him platonically.

The woman who gives the lap dance — the same one who disrobes, I think — gets the only legitimately funny lines in the whole movie: “If your girlfriend donates her kidney to you, you should get a new girlfriend. Who wants a girlfriend with just one kidney?”

The most offensive part of the movie happens following the broken engagement between Preet and Jazz, the son of a gangster named DG (presumably so-named because someone had a giant Dolce & Gabbana logo necklace he could wear during the shoot). DG insists that Preet is going to get married regardless, but to whom? A random flunky? Another son we didn’t know about?

Nope. He’s going to marry her to a black guy.

The gangster considers it a punishment to marry this young, Indian woman to an African man. Preet’s mom evidently agrees, procuring bottles of poison for herself and her daughter to drink before the ceremony.

The insults continue after Kabir rescues Preet (though not her mom, whom they leave at the gangster’s mansion, the bottle of poison at her lips). Kabir threatens to return Preet to “that black bull,” and Preet repeats the slur.

Come on, Karle Pyaar Karle. Why couldn’t you just let me enjoy your insane plot twists, soft-core dance numbers, rocket launchers, and multiple exploding cars? Why did you have to ruin things with rape threats, racism, and perpetuating moral double standards for women? Why couldn’t you just be stupid and harmless?