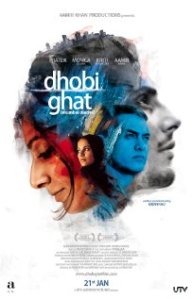 I live in a busy Chicago suburb with 150,000 residents. Despite living in a condominium building with several other families, I can go days without talking to anyone besides my husband. I see the UPS delivery man more often than my friends, who are scattered across the metro area.

This is the type of modern, urban isolation that writer-director Kiran Rao captures in her debut effort, Dhobi Ghat (Mumbai Diaries). All four of Dhobi Ghat‘s main characters are, in their own ways, isolated, despite living in crowded Mumbai.

Rather than impose a convenient narrative upon the four lead characters, Rao’s plot drops in on them during a specific period in their lives and leaves before delivering a tidy ending. It feels more like a documentary than a fictional film.

Adding to the documentary feel, the film opens with home movie footage shot from the backseat of a taxi, by a woman we later learn is Yasmin (Kriti Malhotra). Having recently moved to Mumbai after getting married, she records mundane scenes from her new life to send to her brother back home.

Brooding artist Arun (Aamir Khan) finds some of Yasmin’s video letters and forms something of an obsession with the woman on the tapes. His video obsession is more convenient than a relationship with a real woman, such as American investment banker Shai (Monica Dogra), who’s herself a bit obsessed with Arun.

Shai befriends the young man who does her laundry, aspiring actor Mannu (Prateik Babbar). Mannu, who also does Arun’s laundry, quickly develops a crush on Shai.

There’s an emotional distance between all of the characters, and Rao uses the camera to emphasize it. The characters are shown through windows or through the lens of amateur photographer Shai’s camera. Their reactions are captured in the reflections of mirrors.

The relationship between Shai and Mannu is the most interesting. How deep can their friendship be when he works for her? Is he really her peer? Shai doesn’t give it much thought. Mannu does.

Prateik Babbar is perfect as Mannu: a handsome guy whose shy nature and low social rank have made him incongruously meek. Khan, Dogra and Malhotra are compelling as the other leads, making as much out of their silent moments as they do out of their dialog.

Dhobi Ghat is a remarkably quiet movie. Not exactly quiet, but absent most of the usual sound effects and musical score. Much of the background noise is provided by urban sounds: rain, traffic, old movie music played on a record player in a nearby apartment.

Mumbai itself has a starring role in Dhobi Ghat. The film is shot in locations around the city, not on movie sets. There’s no attempt to hide Mumbai’s flaws, which serve to make the city more appealing and familiar, even to one who’s never been there.

Aamir Khan used his star power to force Indian multiplexes to show Dhobi Ghat without the usual intermission break. It may have cost the theaters some concession sales, but it allowed the movie to flow for its entire 100 minute runtime. An interval would broken the movie’s spell.

Should Dhobi Ghat succeed at the box office, it could persuade more Indian filmmakers to craft shorter films meant to be viewed in one sitting. Rao’s economy of characters, plot and runtime demonstrate how less can often be much more.