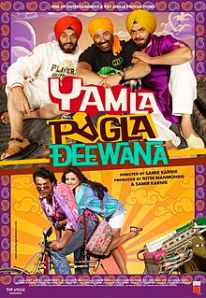 The primary selling-point of Yamla Pagla Deewana (“Nutty Loony Crazy,” according to the lyrics of the title track) is that it stars Bollywood legend Dharmendra and his two sons, Sunny and Bobby Deol. But what if you didn’t know who the three leads were? Would the movie be as successful? I don’t think so.

Sunny Deol’s character, Paramveer, has lived in Canada with his mother since he was a child, after his thieving father ran off with his younger brother. After thirty years apart, Param’s mom begs him to bring her estranged husband and son back to her. He obliges and heads to Banares.

Param’s father, Dharam (Dharmendra) and brother, Gajodhar (Bobby Deol), don’t believe Param’s story. But Param gradually wins their trust, in part by acting as strongman during their heists. When Gajodhar’s girlfriend, Saheba (Kulraj Randhawa), is kidnapped by her goon brothers and taken home to Punjab, Dharam begs Param to help his younger brother.

Producer/director Samir Karnik frequently reminds the audience about the actors’ star status. When Param shows Dharam a photo of the conman in his youth — proof of his prior relationship with Param’s mother — Dharam explains that it must be a photo of Dharmendra.

Later, Saheba asks Gajodhar why he’s not fighting beside his father and brother. He says that its best to let Dharmendra and Sunny Deol handle the action, leaving the romance to Bobby Deol.

The self references are distractions that ruin the flow of the movie. If one is familiar with the actors’ previous work, it’s no surprise that Sunny does all the fighting and that Bobby gets the girl. If not, the references make no sense.

The distractions and the slow pace of the first half are a shame, as the second half of Yamla Pagla Deewana is quite good. Anupam Kher is hilarious as Saheba’s eldest brother. Jokes about the qualities ascribed to English speakers in a place where the language not common, as in rural Punjab, are both informative and funny.

Param has an interesting role as a non-resident Indian (NRI). His blonde, Canadian wife, Mary (Australian actress Emma Brown Garrett) thinks that everyone in India is crazy. Saheba’s sister-in-law, Poli (Sucheta Khanna), thinks that Canada is paradise. She reads about Canada on the Internet, in spite of her limited English skills (as betrayed by her “I Love Caneda” t-shirt). Param, as both Indian and Canadian, bridges that gap and exploits it to his advantage.