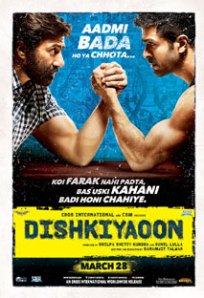 Dishkiyaoon (an Indian onomatopoeia for the sound of a gunshot) aspires to be more than your average underworld action drama. It doesn’t meet its lofty goals, but it deserves credit for trying.

Debutant writer-director Sanamjit Singh Talwar’s ambitions cause problems from the start. The movie opens with Lakwa (Sunny Deol) and Viki (Harman Baweja) — though Lakwa insist on calling Viki “Chaudhray” for some reason — discussing Viki’s past. Flashbacks show everything from Viki being bullied in grade school to his joining a gang led by Mota Tony (Prashant Narayanan).

Every time the flashback returns to Lakwa and Viki in the present, the audience is reminded that we don’t know who these guys are, where they are, how they know each other, or why they are together at that moment. Those issues raise — and fail to answer — the fundamental question every director needs to answer within the first fifteen minutes of any movie: Why should we care?

When the questions of where they are and why are answered at the story’s midpoint, the revelation is underwhelming. The gimmick is not worth the frustration.

Dishkiyaoon‘s hook is that Viki isn’t a typical Bollywood action hero. Despite his buff physique — Baweja spends much of the movie shirtless — adult Viki is emotionally the same bullied little kid. He lacks swagger, despite the impunity that comes with being a gangster. When a pretty girl named Meera (Ayesha Khanna) asks what he does for a living, Viki bows his head sheepishly before showing her the pistol he always carries but never uses.

In many ways, Viki’s journey is less about his attempted rise to underworld supremacy than his search for an ideal father figure. Viki rejects his own inattentive, pacifist dad, first in favor of Tony, and then Lakwa. Most of the men around him are more alpha than Viki, including disreputable thugs like Rocky (Anand Tiwari) and Khaleefa (Sumit Nijhawan). Every event of consequence in the movie is a reaction to wounded male pride.

Only his childhood pal, Ketan (Hasan Zaidi), is as submissive as Viki, though Ketan’s low rank in the pecking order suits his position as a mafia accountant better than a buff flunky like Viki.

The underworld is so densely populated with gangsters, thugs, toadies, and corrupt cops — and they’re introduced in such rapid succession — that it’s impossible to keep track of them all.

Meera’s presence is superfluous. She’s supposed to represent the life Viki could have outside of organized crime, but leaving the mob isn’t that easy, and Viki never expresses a desire to do so.

The music in Dishkiyaoon is distracting, as it bounces from genre to genre without a governing theme. Meera’s introduction is accompanied by a heavy metal tune as she shreds on an electric guitar that isn’t plugged into an amplifier.

Baweja is okay as a leading man. In his defense, Viki is a hard character to pin down. Baweja does a nice job in the film’s climax, a scene in which Viki seems to lose his marbles.

Throughout most of Dishkiyaoon, I wondered if Viki was hallucinating Lakwa. His only connection to the plot is through Viki, and he fills the role of Viki’s ideal father figure. The story eventually confirms that Lakwa does exist, but wouldn’t it have been interesting if he didn’t?