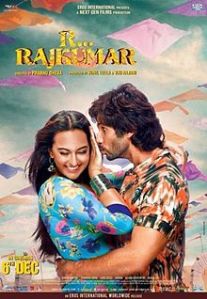 The double shame is that the character who suffers most from this misogyny, Chanda (Sonakshi Sinha), is a strong female character. Yet the script reduces her to a plot device, beaten and threatened with rape just to inspire the heroic deeds of the title character, Romeo Rajkumar (Shahid Kapoor).

Romeo, a hired thug, comes to town to join a gang headed by Shivraj (Sonu Sood), a drug lord at war with a rival opium dealer, Parmar (Ashish Vidyarthi). He falls in love with Chanda at first sight, becoming so lovestruck that it hampers his ability to carry out his duties on behalf of Shivraj.

Romeo’s love-induced impairment repeatedly endangers the life of his fellow henchmen and best friend, an apparently unnamed goon played by Mukul Dev. Their playfully antagonistic friendship is the highlight of the movie, even though it mostly disappears in the second half of the film.

The humor in Romeo’s friendship and in his pursuit of Chanda are hard to reconcile in the context of a movie that treats violence against women as a given. Chanda is brutally lashed with a belt a dozen times by her uncle, who objects to her romance with Romeo. In the very next scene, the same uncle is seen clowning around with his underlings, accompanied by a flatulence sound effect.

Is the audience supposed to ignore the beating the uncle administered to his niece just seconds earlier? Is he supposed to be a source of comic relief or a monster? It’s one thing for the uncle to abuse his underlings; they signed up for the job. Chanda is beaten because she is a woman.

In another scene, Shivraj threatens Chanda in order to provoke Romeo: “I’ll tie her up and rape her in front of you.” However, in the English subtitles, the word “rape” is censored, written as “r**e.” So rape is too vile a word to read, but not too vile an act to depict onscreen or use as a threat?

It’s so frustrating because R… Rajkumar is otherwise pretty good. Romeo and Chanda develop a sweet relationship over the course of the film. Kapoor shows a wide range in his performance, and his dancing is top-notch, as always. Sinha is brave and resolute while enduring all the abuse the script throws at her.

I wish I could recommend R… Rajkumar, but I just can’t. It portrays violence against women as a social norm, something a woman can only escape if she has a boyfriend with superhuman strength to defend her. Why couldn’t this just be a fun movie and not a regressive piece of social commentary?