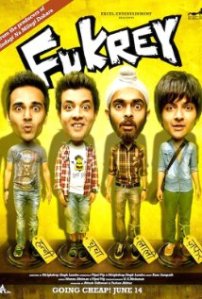 There’s a fundamental problem at the root of Fukrey. The story is about a couple of guys: one who has prophetic dreams, and another who interprets those dreams to pick the day’s winning lottery numbers. The guys run into trouble when they borrow money from a mobster and can’t pay it back.

Here’s the problem: with this infallible gambling system, why do they need to borrow money? Why aren’t they already rich?!

That the writers missed such an obvious problem is indicative of just how shoddily organized Fukrey is. As a result, the movie is a boring waste of 2 hours and 10 minutes.

Nothing occurs in a succinct or timely fashion in Fukrey. The prophetic dreams aren’t even mentioned until thirty minutes into the movie, and they don’t become relevant to the plot until the fifty-minute mark. The guys don’t get into trouble with the gangster until 75 minutes have passed, so nothing of consequence happens until the movie is half over.

Meanwhile, Hunny is completely obnoxious in his pursuit of Priya (Priya Anand). He pops his collar and lies about his experience with French kissing (unless he’s been practicing on Choocha). Hunny lingers outside Priya’s house, posing with his best Derek Zoolander “Blue Steel” expression. He does everything that would turn a real-life woman off, but Priya falls for him because Hunny is the hero, and movie heroes always get the girl.

For some reason, writer Vipul Vig and director Mrigdeep Singh Lamba decided to make this about a quartet of guys, rather than keeping the story focused on Choocha and Hunny, the only two characters germane to the plot. Lali (Manjot Singh) would like to get into college to spy on his cheating girlfriend, and Zafar (Ali Fazal) hangs around campus playing guitar. Lali’s only contribution to the plot is that he puts his family’s restaurant up as collateral in the gambling scheme. Zafar is a superfluous mope.

Richa Chadda plays the mobster, Bholi. Her gang consists of a bunch of musclebound black men who operate a diversified crime  portfolio of drug peddling, extortion, prostitution, and even a telemarketing scam. The race of Bholi’s bodyguards is only significant because, at one point, Choocha refers to her gang as “the Chicago Bulls.” Shortly thereafter, Hunny wears a polo shirt sporting a Confederate flag patch. Not content to just be boring, Fukrey has to be racist, too.

The movie might make a little sense if Bholi had heard about Choocha’s prophetic dreams and decided to exploit his abilities for her own gain. But why do Choocha and Hunny need to go to her at all? The first time they won the lottery, why didn’t they save a little of their winnings and do the same thing the next day? That’s how gambling works: you win a little bit, and you keep playing hoping to win even more.

Since Hunny and Choocha know their system works, why haven’t they been exploiting this system for years, amassing a huge fortune? Just how dumb do you have to be to screw this up?

It’s not possible to care about characters this stupid. I hoped that Bholi would get sick of these morons and kill them for kicks. She doesn’t, so there’s really no good reason to see Fukrey.