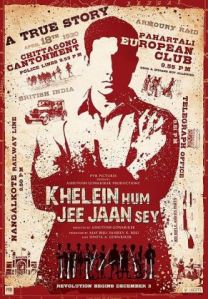 Sixty-three years after the end of the British Raj, it’s clear that the Brits were in the wrong in their oppression and exploitation of South Asians. At the time, however, both sides — the oppressors and the oppressed — felt victimized when they were on the receiving end of a violent attack. One person’s terrorist is another’s freedom fighter.

Oscar-nominated director Ashutosh Gowariker’s latest, Khelein Hum Jee Jaan Sey, tells the story of one act of rebellion during the Raj: the Chittagong Uprising of 1930.

At the time the movie takes place, groups of freedom fighters, impatient with the slow progress of Ghandhi’s passive resistance, opt for violence as a means of ousting the British from India. In Chittagong, the local resistance group is led by Surjya Sen (Abhishek Bachchan), a schoolteacher who uses his meager salary to organize a small group of fighters.

Surjya is able to expand his plans to drive the Brits from Chittagong when a simple act brings a large group of new recruits his way: the army takes over the local soccer field to use as a camp. The town’s teenagers, outraged at being evicted from their pitch, ask for Surjya’s help in reclaiming it.

Surjya hatches a plan to simultaneously take over strategic points in town, including the telegraph office, the armory and army barracks. He’s aided by two female recruits, Kalpana (Deepika Padukone) and Pritilata (Vishakha Singh), who engage in reconnaissance by posing as maids.

Before the plan can be executed, Surjya must train his army of gangly teens. Though the boys are committed to the cause, they’re still kids and not eager to martyr themselves. As one boy observes, what good is freedom if you’re not alive to enjoy it? The first half of the movie covers the group’s preparations, and the second deals with the raid and its aftermath. (Given that the British didn’t leave India until seventeen years later, I suspected the raid wouldn’t be a complete success.)

Stills at the beginning of the movie state that the plot is taken directly from written accounts of people involved in the Chittagong Uprising. Gowariker chooses realism over big-screen clichés in his portrayal of the moving story. Characters act like real young people faced with mortal danger for the first times in their lives would: scared and confused instead of fearlessly self-assured. The absence of timely motivational speeches is refreshing.

That realism makes the movie engaging and the story of their rebellion that much more inspiring. A lifetime spent watching movies with happy endings makes you believe that maybe these plucky kids really can drive out their oppressors and go back to playing soccer. But, from our experience with the characters, we know that isn’t possible, even if the teens think it is.

The performances are solid throughout. Bachchan, Padukone and the other adult characters are riveting, as they begin to realize how they’ve endangered the teens in their care. The teens are endearing, both awkward and noble as they muster up all the courage they’ve amassed in their limited amount of life experience. The soundtrack is catchy, yet appropriate for the somber story.

I just finished reading the book Three Cups of Tea, about one American’s attempts to build schools in Pakistan and Afghanistan. In it, he recounts a story of American military helicopters flying low over an open air girls’ school, the resulting wake knocking over and breaking the school’s only blackboard.

Civilian casualties and night raids on houses get all of the publicity, but we can never know what small act — like taking over a soccer field or, perhaps, destroying a blackboard — might be the final straw that pushes a young person to violence. I wonder how our own treatment of the civilians under our care will be viewed 63 years after we leave Afghanistan.